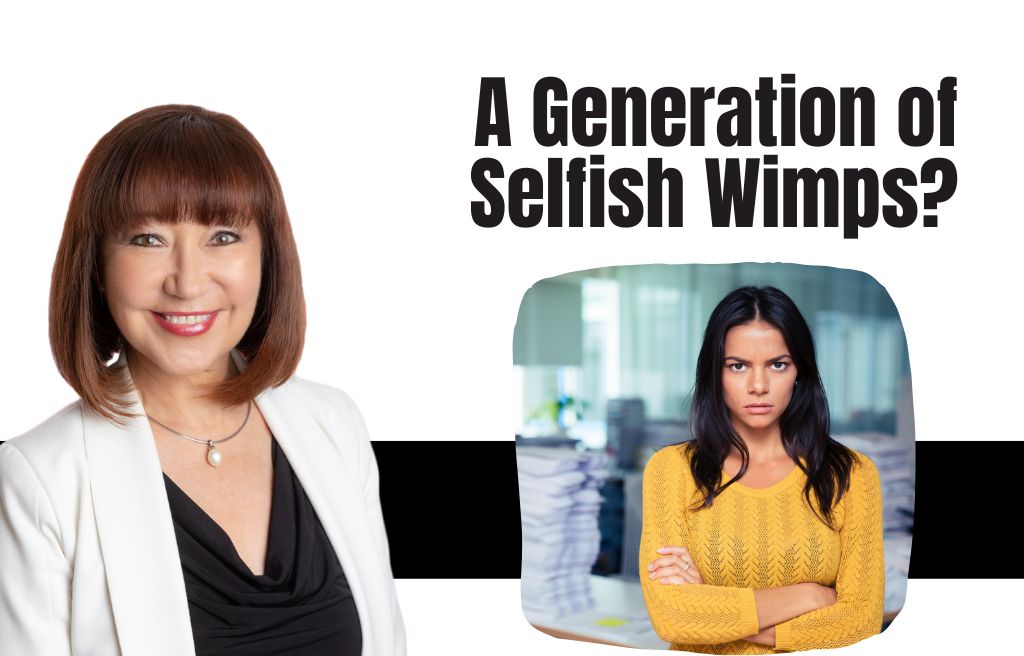 “We have raised a generation of selfish weaklings!”

This huge debate has ignited on social media after a business guru said that “old boomer bosses” are forcing younger employees out of their jobs. But is it true that there is a big gap between baby boomers and millennials?

I’ve listened to people calling into talk radio and complaining about “lazy” millennials, and young people complaining about baby boomer executives because they despise being “needlessly told what to do by their older bosses.”

I feel like it sounds like a schoolyard fight with name calling and stomping and it will all end in tears.

In comments posted on news sites and social media, there were Boomer responses to complaints from “lazy and entitled” young people about “toxic old-style managers” who apparently make their working lives hell.

As a coach who specializes in career transition coaching, I find this fascinating because of the swearing and sweeping generalizations that are made in this discussion. Well, that’s not really a debate, is it? It’s more like a mud-slinging match!

I feel that an open perspective is needed to help solve this problem.

First of all, yes, post-Covid there have been many reports of the “Great Retirement” with people looking for more meaning in their work and preferring more flexibility in how they work.

And yes, there are staff shortages in many of Australia’s key industries, with many businesses struggling to recruit.

But to blame an whole generation or another for a situation or issue is acting like a fanatic. [The definition of a bigot, according to the Oxford English Dictionary is “A person obstinately and unreasonably wedded to a particular religious creed, opinion, or ritual.”]

What I find essential is taking time out to really LISTEN to what is being said and what meaning behind the words. Many people are frustrated and short-tempered, which inevitably ends in misunderstanding, disharmony, and in this case, unnecessary insults.

The problem isn’t millennials vs. baby boomers, it’s communication and understanding expectations in the workplace.

Let’s take a look at history first, because the generational feud is nothing new.

There is a 2,500-year history of misunderstandings between younger and older generations. [Thanks to Joe Gillard from History Hustle for the following research and quotes.]

For centuries, the young have been blamed for destroying what the older generation held sacred, only to have them say the same about the next generation as they grow older.

In the village 4thousand Century before our erasaid Aristotle “[Young people] noble because they have not yet been humiliated by life and have not experienced the force of circumstances… They think they know everything and are always sure of it.»

U 1624 yearin Thomas Barnes’ Prognosis of a Wise Man Against an Evil Time, “Youth has never been more daring, and never more wild audacity… the ancients are despised, the venerable are condemned, the magistrate is not afraid.”

In Letter in Town and Country, reprinted in Paris Fashion: A Cultural History in 1771 year“Where did the manly strength and athletic appearance of our ancestors go? Could these be their legal heirs? Of course not; a race of .

U 1926 yearThe behavior of young people, in the Hull Daily Mail, “We defy anyone who walks around with their eyes open to deny that there is, on the part of young people, an attitude that can best be described as very thoughtless, rude and completely selfish, as never before.»

Printed by the Portsmouth Evening News 1936 year“There has probably never been a period in history when young people have so strongly expressed their inclination to reject the old and desire the new.»

U 1984 year The Wall Street Journal, Not Ready for Middle Age at 35, “Several [35-year-old friends] only now are they leaving the parental nest. Many friends are getting married or having their first child. They don’t change careers because they’ve finally had a “significant” career – perhaps after a decade of identity hopping. They are doing things that our society has come to expect from 25-year-olds.»

And most recently, the Washington Post 1993 year published, “What really sets this generation apart from previous ones is that it is the first generation in American history to live so well and complain so bitterly about it.”

The Financial Times meets Generation X 1995 year“The traditional pursuit of a friendly employer who can provide a job for life also seems to be on the wane … In particular, they want to avoid “low-level work that does not cause them intellectual problems”.»

And finally, 21 years ago (2001 year) Time magazine published in the article “Proceeding with caution,” “It is difficult for them to make decisions. They would rather hike in the Himalayas than climb the corporate ladder. They have few heroes, no anthems, no style to call their own. They crave entertainment, but their attention spans are as short as one click on a TV dial.”

Little seems to have changed in over 2,500 years in what one generation thinks about the next.

And, just for the record, if you don’t know what generation you’re considered to be, here it is a rough guide (there is overlap as there are no standard definitions of when a generation begins and ends):

** Note: These dates are estimates based on research by the Pew Census Bureau, Harvard

SOLUTION: A question of leadership

What can be done to solve this problem of “lazy and entitled” millennials and the “toxic” old boomer management style?

I’ve found that more often than not, when evaluating how they handled their previous roles, the problems weren’t because they weren’t technically capable of performing their roles well; the problems arose from unrealistic expectations on both sides, a mismatch of values, and an organizational culture that did not provide a positive and productive work environment.

“Lack of gratitude” was mentioned to me more often than I expected.

The solution to this “generational divide” is open communication and effective leadership and self-leadership training.

Forget generations. Focus on individuals. Every person, whether an employee, supervisor, manager or leader, needs to understand what it takes to lead another PERSON.

The only way to know what leadership style works best with another person is to observe, listen, and provide open channels of communication to achieve understanding both sides.

Never ASSUME what another person needs or wants because of their generation, gender, culture, or demographics.

Take the time to listen to UNDERSTAND rather than listen to respond.

It reminds me of a song by Cat Stevens called Father and Son (maybe in today’s world of political correctness the song should now be called “Father and Child”?), in which the words

“How can I try to explain?
When I do, he turns away again
It was always the same, same old story
From the moment I could speak
I was ordered to listen
Now there is a way
And I know I have to leave
I know I have to go”

But my suggestion to Millennials and Baby Boomers, before jumping to generalizations and conclusions, the lyrics also say:

“The whole time I was crying
Keeping everything he knew inside
It’s hard, but it’s harder to ignore it
If they were right, I would agree
But they know that, not me…”

A little understanding of where the other is coming from makes for better communication, less frustration and misunderstandings.

Please feel free to voice your opinion in the comments because everyone deserves to be heard. And if you need support with your career, reach out for a free career clarity chat – DM me!

Or visit www.thecareersacademy.online for a unique combination of on-demand and live career development, career change and leadership development support.