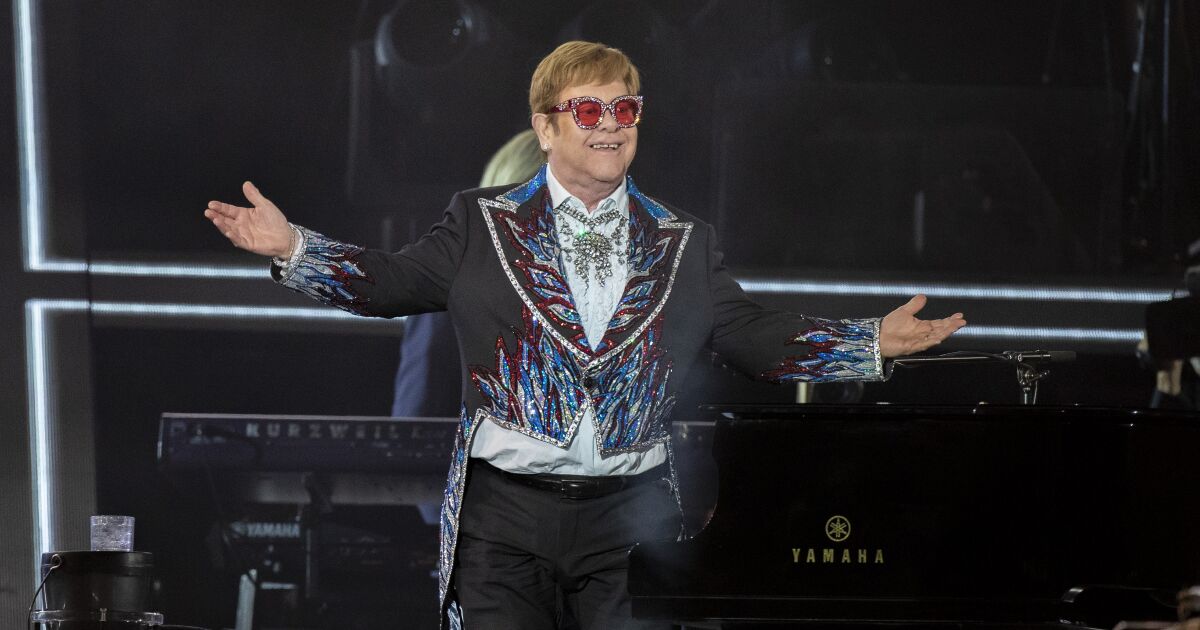 After a dazzling opener on Thursday and a triumphant encore on Saturday (“Saturday, soooo!”), Elton John returned to Dodger Stadium on Sunday for his final North American bow.

The legendary artist let the sun set over Los Angeles one last time as he returned to the stage that catapulted him to superstar status almost 50 years ago. During Sunday’s performance on the North American leg of his Farewell Yellow Brick Road Tour, John was joined by his co-stars Dua Lipa, Brandi Carlyle and Kiki Dee.

But they weren’t the only stars who came out to support the famous singer and pianist at his grand finale at Dodger Stadium, which is available to stream live on Disney+. Other celebrities in attendance included Lizzo, Heidi Klum, Jenna Dewan, Amanda Klutts and Angela Bassett.

“The first time I came here to America was in 1970 to the City of Angels … and I played at a club called the Troubadour … and that helped me by accelerating my career in America because of the exposure I got by Robert Hilburn for the LA Times. So I will never forget it.”

In accordance with his previous shows Farewell Yellow Brick Road, John performed some of his greatest hits, from “Tiny Dancer” and “Bennie and the Jets” to “Saturday Night’s Alright” and “Your Song.” He also showed off his supporting acts by performing some duets: “Frozen” with Lipa, “Don’t Let the Sun Go Down on Me” with Carlyle and of course “Don’t Go Breaking My Heart” with with the participation of Dee.

“In 1975, my next guest was here and sang with me and we sang this song,” John said before introducing Dee.

“I thought it would be great to recreate that incredible moment. So I asked her to come and she did. Here’s Kiki Dee!”

Crowds of multi-generational fans arrived at the venue early to stem traffic that was predictably nightmarish ahead of Thursday and Saturday’s shows. Sunday was no exception.

“I’ve been listening to him since my parents … and then, going through the AIDS crisis, he stepped up and took the lead … that really meant a lot to me,” said concertgoer Shawn Masse, 53, a registered a nurse from South Los Angeles who has been wearing his own very shiny version of John’s iconic Dodgers uniform since 1975. “Also, everything he went through with his sobriety and his drug use … he was a beacon of light for everyone.”

John had a few more tricks up his shiny sleeves before his final farewell. Near the end of the show, he welcomed his longtime songwriting partner Bernie Taupin to the stage, who hugged his friend and gave warm praise to John’s band.

“We’ve been writing together since 1967 and we … love each other more than ever before,” John said. “He’s amazing.”

Next up was John’s husband, David Furnish, and their two sons, Elijah Joseph Daniel and Zachary Jackson Levon, who waved to the audience to thunderous applause. John explained that he decided to stop touring to spend more time with his family, who he brought “to show you why I’m retiring”.

With his swan song at Dodger Stadium, John is gearing up for the epilogue of his Farewell Yellow Brick Road tour, which will continue overseas next year and wrap up in Stockholm, Sweden in July.

“Thank you to everyone who dressed up. I’m so happy to see you wearing the most fantastic costumes,” John said during his final speech of the night.

“I became successful in America for the first time, and you bought singles and albums … cassettes, CDs – and more importantly, you bought tickets to the shows that I love the most … I want to thank you for this , because you did i. Without America, I wouldn’t be here. … I wish health and love, well-being. Be kind to each other, okay? And farewell.”