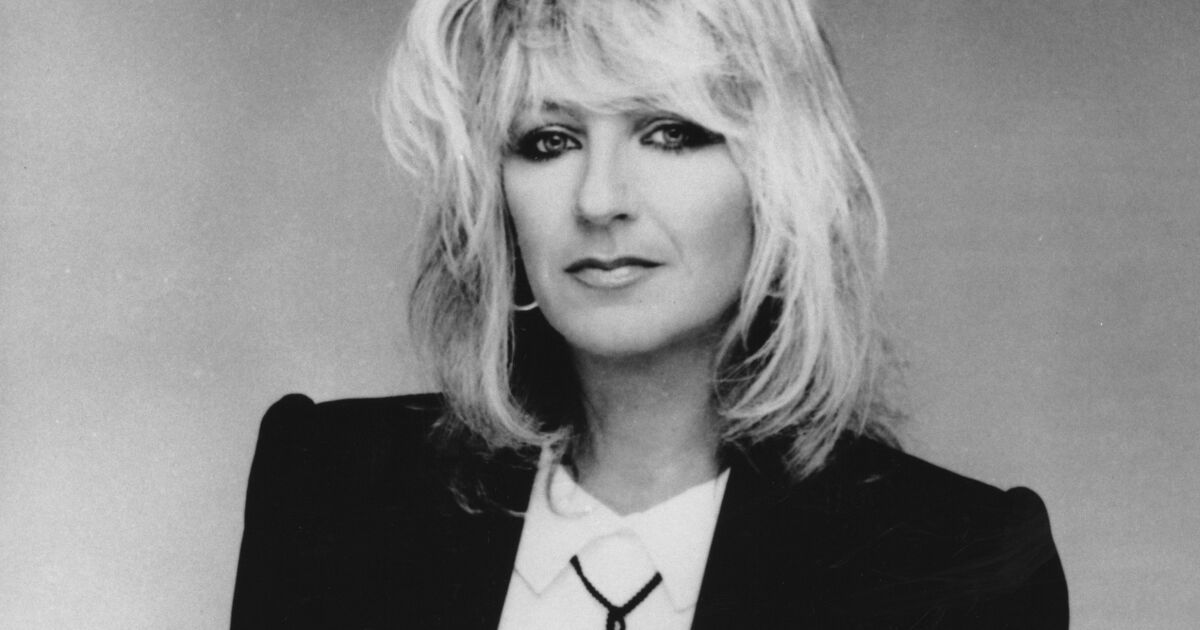 Christine McVie, the singer-songwriter and keyboardist whose dreamily upbeat tunes for Fleetwood Mac — including such FM radio staples as “Don’t Stop,” “A little lie,” “Singing bird,” “Everywhere” and “You make love fun” – died on Wednesday. She was 79.

Her death was announced by her family in a statement, which said she “died peacefully” in hospital after a “short illness”. The location of the hospital is not specified in the statement. McVeigh, who lived in London, told Rolling Stone in June that she was in “very poor health,” describing a chronic back problem that made it difficult for her to stand.

“There are no words to describe our sadness at the passing of Christine McVie,” Fleetwood Mac said on social media. “She was truly one of a kind, special and incredibly talented. She was the best musician a band could have and the best friend in life. Individually and together, we cherish Christine deeply and are grateful for the wonderful memories we have. She will be greatly missed.”

In a famously fractious line-up filled with competing songwriters — Fleetwood Mac’s classic line-up also included singers Lindsey Buckingham and Stevie Nicks, as well as drummer Mick Fleetwood and bassist John McVie, to whom she was once married — Christine McVie was perhaps the most talented hitmaker. with a natural sense of melody and a supple, soulful voice that seemed to send her songs into the world. “I don’t fight over my songs,” Rolling Stone quoted her as saying in 1977. – I write them quickly.” On stage, her steady presence at the keyboard was a vital counterbalance to the more dramatic figures created by Buckingham and Nicks, whose rocky romance became the backbone of the band’s darkly glamorous legend.

She also served as a kind of link between Fleetwood Mac’s early days as a British blues-rock combo and its commercial peak as a Los Angeles soft rock act in the 1970s and ’80s. Other notable songs she wrote for the band included “Hold Me,” “Think about me” and “Say you love me,” which epitomized her easy-going yet sensual approach. “When love begins and the light fades / There’s not a living soul around,” she sang in a gentle, flowing groove, “You chase me till the sun comes up / And you say you love me.” Fleetwood Mac won Album of the Year at the 1978 Grammy Awards for Rumours, which sold more than 20 million copies in the United States alone; the band was inducted into the Rock and Roll Hall of Fame in 1998.

On Wednesday, Nicks posted a handwritten note on Instagram in which she called McVeigh “my best friend in the whole world since day one in 1975” and said she only found out McVeigh was ill on Saturday night. lyrics to “Hallelujah” by Los Angeles sister trio Haim, who wrote in an Instagram post that “the sisterhood that Stevie and Christine had was so important to us growing up.”

McVie was born Christine Perfect on July 12, 1943, in the village of Bute in northwest England. Having learned to play the piano as a teenager—her father was a music professor, her mother a psychic—she joined the band Chicken Shack in 1967 and scored a modest hit with a cover of Etta James’ “I’d Rather Go Blind.” She married John McVie in 1968 and joined Fleetwood Mac in 1970, shortly after releasing her debut solo album, Christine Perfect; after a series of personnel changes involving the group’s frontmen, Buckingham and Nicks arrived in time for Fleetwood Mac’s self-titled 1975 album.

“Rumours,” with its careful balance of high-stakes emotion and rich hippie iconography, documented the breakdown of the band’s many relationships, including McVeigh’s 1976 divorce. (The flirtatious “You Make Loving Fun,” the story goes, grew out of her affair with the group’s lighting director.) McVie continued to play with Fleetwood Mac throughout the late ’70s and ’80s—”Hold Me” from 1982’s “Mirage” 1984 was inspired by her relationship with Dennis Wilson of the Beach Boys—and she released a second solo album in 1984. She married Eddie Kintel, a Portuguese musician, in 1986; the couple co-wrote the song “Little Lies” for the album “Tango in the Night” the following year and divorced in 2003.

A reluctant traveler who often spoke of her fear of flying, McVie turned down a tour with Fleetwood Mac to support 1995’s ill-received “Time,” although she performed “Don’t Stop” with other key band members at President Clinton’s inaugural ball . She later took part in “The Dance”, a very successful live album released in 1997, after which she left the band and moved to the English countryside.

She surprised fans by rejoining Fleetwood Mac in 2014 for a long reunion tour. “I did virtually nothing in the country during my 16 years of retirement,” she told The Times in 2017. “I was busy walking the dogs – I didn’t really do anything very constructive.” (In 2004, she released In the Meantime, which she described as a “little solo album” she made in her garage.) After touring with Fleetwood Mac, she recorded a duet album with Buckingham at Village Studios in the West. Los Angeles is the same venue where Fleetwood Mac recorded 1979’s ‘Tusk’ – before hitting the road again for a full-on performance. In 2018, Buckingham was fired from Fleetwood Mac and replaced by Neil Finn of Crowded House and Mike Campbell of Tom Petty’s Heartbreakers; The band’s last public concert took place in 2019. This year, the sad funk “Everywhere” got a new lease on life as the soundtrack to a massively popular car commercial, earning the song over 580 million views on Spotify alone.

Information on McVeigh’s survivors was not immediately available.

In a 2014 interview with The Times, McVie described how she overcame her fear of flying, which she said involved gradually becoming desensitized to the idea; her breakthrough came when Fleetwood accompanied her on a flight to Maui, where she sat with the drummer and her ex-husband at a performance by their blues band.

“I did a couple of songs there, I was fine on stage, and then I thought, ‘I’m really missing something – that my, that I just gave up and I don’t give credit to my own gift,” McVie said. “I saw that if I wanted to start playing again, there was only one band I wanted to play with and that was Fleetwood Mac.”

How the study of science informs the development of edtech products