Today (10th May 2022), Historic England has launched an interactive education tool which will display hundreds of images of the Queen visiting key heritage sites across England during her reign. The story map resource has been created by Historic England’s Heritage Schools team to celebrate the Queen’s Platinum Jubilee and will help school children learn about some of the significant places she has visited in their area of the country.

Funded by the Department for Education and run by Historic England, the Heritage Schools programme aims to help school children learn about their local heritage and its significance.

From opening important civic buildings like town halls and schools, to visiting museums, sports grounds and pubs, the map shows the huge variety of heritage sites the Queen has visited both during and prior to her reign. The story map not only teaches children about the Queen’s role as our monarch, but also highlights the heritage she has visited that is right on their doorsteps.

The story map is available to everyone via the Historic England website, and features images of the Queen visiting significant buildings, places and events in every region of the country. Alongside these images there is information about when and why the Queen visited, as well as a brief history about the site itself.

Many of the buildings are listed on the National Heritage List for England (NHLE), and children and the public can take part in the Platinum Jubilee commemoration, and make history, by contributing their own images, drawings or information about the building to the NHLE through Historic England’s Enriching the List project.

“This interactive map shows the incredible variety of sites the Queen has visited in the past 70 years. We hope schools, teachers, parents and the wider public will explore the map, discover more about their local historic sites and follow in the Queen’s footsteps by supporting their local heritage.”

“Queen Elizabeth II is the first British Monarch to celebrate a Platinum Jubilee and Her Majesty’s dignity, commitment and grace continues to inspire people all over the world.

“It’s so important that children have the opportunity to learn about the Queen’s life, and millions will soon have access to a number of educational resources including the brilliant interactive story map announced today, and the Department for Education’s Platinum Jubilee Celebration book, which will begin to arrive in schools this month.”

SOME HIGHLIGHTS FROM ACROSS THE COUNTRY 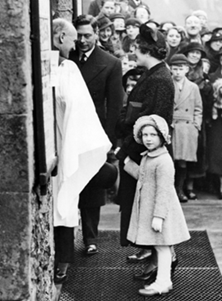 The Queen (Princess Elizabeth at the time) between her parents, then the Duke and Duchess of York, with her sister Princess Margaret, attending a service at St. Mary’s Church in Eastbourne in 1936. St Mary’s is the parish church for Eastbourne. The earliest parts of this large Grade I listed church date back to the 12th century, but it is mentioned in the Domesday Book. There are many medieval features remaining including the font and screens but also more recent additions of note such as stained-glass windows by renowned Scottish designer, Douglas Strachan. The royal visit took place two months after the death of King George V, who had visited St Mary’s while on holiday in Eastbourne in 1935. 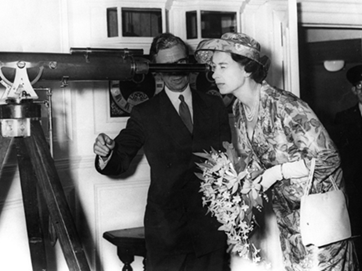 The Queen visited the restored Flamsteed House, the oldest building of the old Royal Observatory at Greenwich, in 1960. This distinctive red brick and white stone building is thought to be the work of Sir Christopher Wren. A Latin inscription states that the Observatory was founded by Charles II in 1676. Astronomers Royal, John Flamsteed and Edmond Halley, plotted all the stars in the northern and southern hemispheres. A time ball, which has been in use since 1833, drops at 1pm everyday as an aid to navigators. The Royal Observatory has been the historic source of the Prime Meridian of the world, Longitude 0° 0′ 0” since the late 19thcentury.

The Queen about to embark from Heathrow Airport with her Corgis for her annual holiday at Balmoral in 1981. Heathrow Airport originally opened in 1946 as London Airport. The headquarters and engineering workshops for the British Overseas Airways Corporation, now British Airways, were built between 1950-55. Engineer, Sir Evan Owen Williams, who also designed the original Wembley Stadium, envisaged a flexible building that would adapt to the needs of the aviation industry. The Queen has owned Pembroke Welsh Corgis since she was a child and has had more than 30 since she began her reign in 1952. 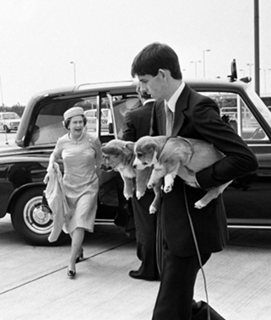 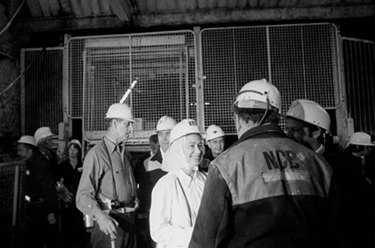 The Queen met ‘onsetter’ Stan Wood after stepping from the cage at the pit bottom, 600 yards underground during her visit with Prince Philip to Silverwood Colliery, near Rotherham on 30 July 1975. Originally called Dalton Main, the first mine shaft was sunk at the colliery in 1900 and the first coal was being worked by 1904. The Queen was following in the footsteps of her grandparents, King George V and Queen Mary, who had visited in July 1912. The colliery was closed in 1994 and parts of the site were replanted with trees and are now run by the Woodland Trust.

The Humber Bridge was officially opened by the Queen on 17 July 1981. The bridge took eight years to build and over 1000 people worked on its construction, which cost £91 million. When it was first built it was the world’s longest single-span suspension bridge and it remains the longest in the UK. People had campaigned for a bridge for over a hundred years as the Humber Estuary was a barrier to trade and transport. The bridge is a total of 2,200 metres (1.4 miles) long, the towers are 155.5 metres (510 feet) tall, and the wire used in the bridge would wrap around the moon more than six times. It is estimated that more than ten million vehicles cross the bridge every year. In 2017 is was given Grade I listed status. 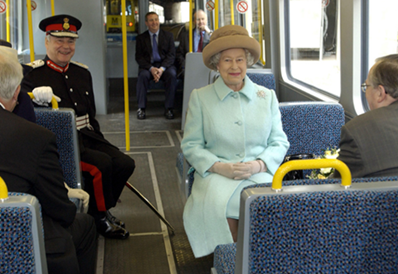 The Queen riding on the new Sunderland to Newcastle Metro Link after officially opening it at the Park Lane interchange, Sunderland. The Queen arrived in Sunderland on the second leg of her nationwide Golden Jubilee tour in 2002. Park Lane is a Tyne and Wear Metro Station, serving Sunderland. The station is located below Park Lane Bus Station, which opened in May 1999 and replaced the former Sunderland Central Bus Station. It is fitted with porcelain enamel panels designed by artist Morag Morrison. 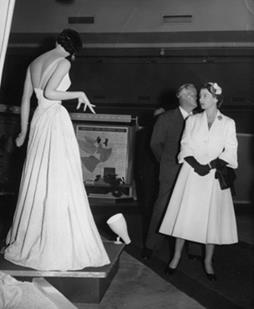 The Queen pauses to look at a dress, made of 100% Terylene, as she tours an exhibition of goods made from the synthetic fibre at the Imperial Chemical Industries’ works at Wilton, near Middlesbrough in 1956. Wilton International is a 2000-acre multi-occupancy industrial site in Redcar. The site was formerly owned and operated by ICI, a large chemical company who opened the site in 1949. The site is one of the UK’s leading process manufacturing clusters. It is now home to eight global chemical giants, as well as numerous smaller firms that supply vital maintenance and engineering services. 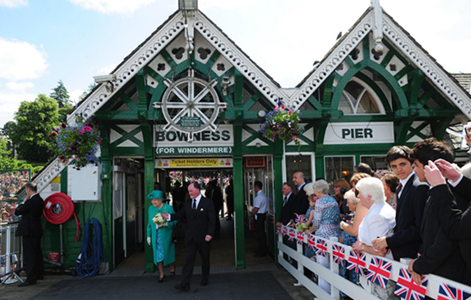 The Queen visited Bowness-on-Windermere pier on 16 July2013as part of a wider visit to South Lakeland. The pier at Bowness is one of many stopping points on Lake Windemere, the largest natural lake in England.  Windemere, until the late 18th century, was used primarily for the transportation of slate, timber and other goods. The arrival of the railways in the mid-1800s, and the establishment of the first steamer service on the lake, led to a gradual increase in tourists into the area.

The Queen visited Crewe on 4 May 1972. Whilst there she formally opened the newly built Leighton Hospital. In the photograph you can see her visiting the children’s ward with Chief Nursing Officer, Susanna Lewis. Built at a cost of £6 million, Leighton Hospital replaced older facilities at Crewe District Memorial Hospital, Crewe Works Hospital, the Linden Grange Maternity Hospital and Coppenhall Hospital in Crewe, as well as Nantwich Cottage Hospital and the Barony Hospital in Nantwich. 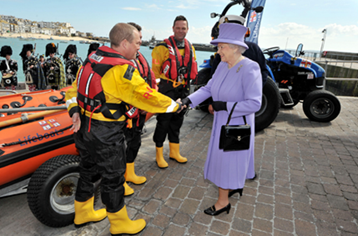 The Queen visited St Ives on 17 May 2013 as part of the Diamond Jubilee tour, unveiling a plaque at the boathouse before greeting the public on the harbourfront and visiting the Tate Gallery. The St Ives Lifeboat Station was built in 1861 at a cost of £142. It is known that a lifeboat has been stationed at St Ives since at least 1840. The present boathouse was built in 1994 as the previous one was not big enough to accommodate the new Mersey class lifeboat. In its history, 34 medals have been awarded to members of the St Ives lifeboat crew. 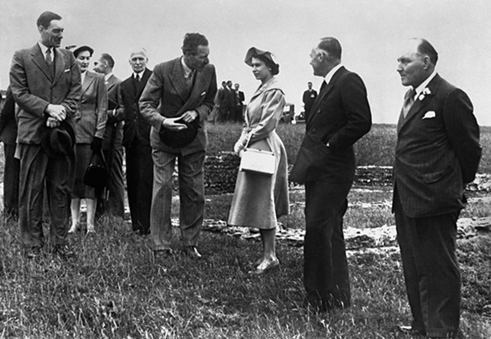 The Queen visited Maiden Castle on 3 July 1952 to see professor Sir Mortimer Wheeler’s archaeological excavation. The scheduled monument is a multivallate (having two or more ramparts) hill fort dating from at least 500 years ago with extensive work dating from the late Iron Age (300 BC). It has been the subject of many archaeological excavations in the 19th and 20th centuries. It is also featured in the novels of Thomas Hardy who uses the name Mai Dun. It features as a location for a scene in John Schlesinger’s 1967 film adaptation of ‘Far from the Madding Crowd’. 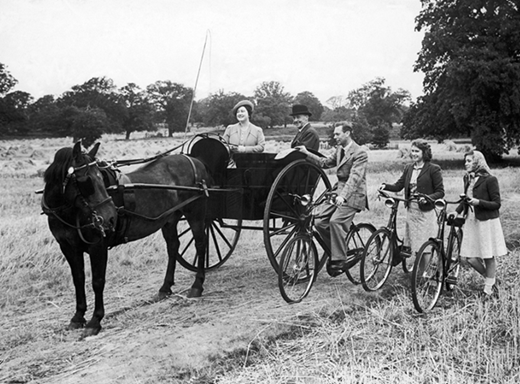 Sandringham House and Estate are a royal residence. The house has been occupied since the 16th century but only became a royal residence in 1862, when the future King Edward VII had the house almost completely rebuilt. It was the setting for the first Christmas broadcast in 1932 by George V. The Queen spends each winter on the Sandringham Estate, including the anniversary of her father’s death and her accession in February, since 1952. In 1957, she broadcast her first televised Christmas message from there.  In 1977, for her Silver Jubilee, the house and grounds were opened to the public for the first time. In early February 2022 the Queen stayed at the house to mark her Platinum Jubilee. 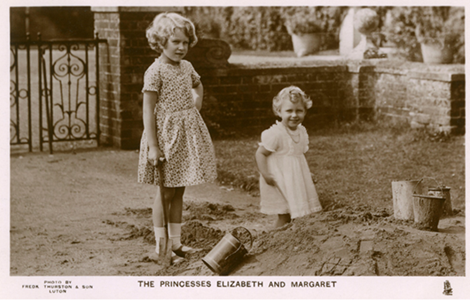 Princesses Elizabeth and Margaret (1930-2002) playing in the sandpit at St. Paul’s Walden Bury. This was the home of their grandparents Claude Bowes-Lyon, 14th Earl of Strathmore and Kinghorne, and Cecilia Cave. St Paul’s Walden Bury was the childhood home of the Queen’s mother, Elizabeth the Queen Mother. The house was built in c1730, along with ornamented formal pleasure grounds in the adjacent woodland. The estate stayed with the Bowes-Lyon family during the 19th and 20thcenturies. The gardens were restored from the 1930s to the 1960s. 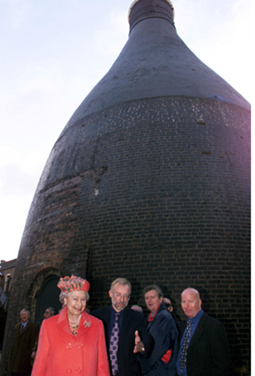 The Queen opened the Dudson Centre on 28October 1999. The Dudson Pottery factory was established by Richard Dudson in 1800. It produced attractive domestic ware until James Thomas Dudson took over the company. He saw the opportunities provided by the expansion of the railways, tourism and hotel trade. Dudsons became specialists in producing tableware for the hospitality industry. By the 1980s the Hope Street factory was no longer suitable and the factory moved to Tunstall, until production ended in 2019. In 1994, the Dudson family donated the Hope Street site to the voluntary sector. The centre houses the Dudson Museum and facilities for voluntary and community organisations. As part of this visit the Queen received a garland of flowers from members of the Hindu community who use the centre. 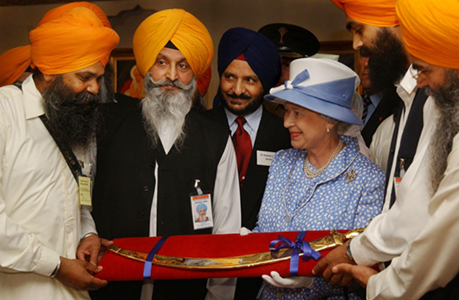 The Queen, having removed her shoes, received a ceremonial sword (tulwar) as a gift, at the end of her visit to the Sikh Gurdhwara Temple on 1 August 2002. The sword is also known to Sikhs, renowned for their martial qualities, as a ‘kirpan’ or ‘Siri-Sahib’. Guru Nanak was the first Sikh Gurdwara in Leicester. It began in the 1960s then in 1989 it moved to its current site, a converted textiles factory close to the Roman Jewry Wall remains. Alongside its prayer room, the Gurdwara also has a fascinating museum. This gives information about the Sikh religion, as well as Indian history in general, with particular emphasis on India in Imperial Britain and Indian regiments of the British Army before and during both World Wars.

The best market days are coming. The only question is when

The best market days are coming. The only question is...

The action to become a superstar – The New Indian Express

The best market days are coming. The only question is...