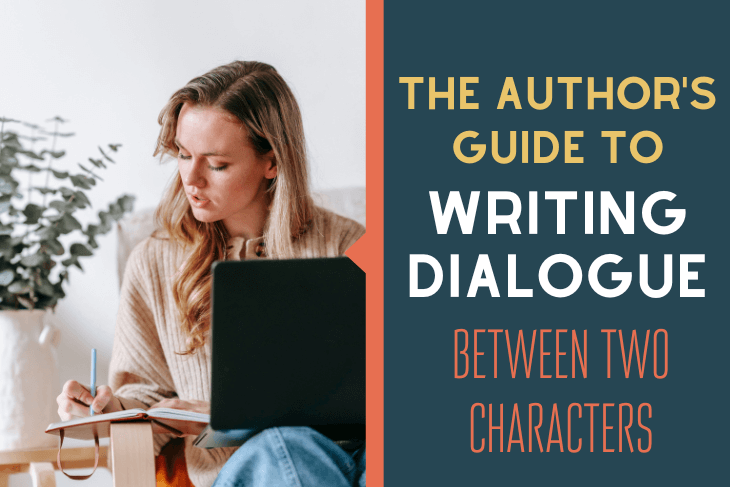 Writers have no problem finding their own voice, but what if other voices are needed, as in the dialogue of the heroes?

The writer must paint the scene with words and then find the right words for the characters’ dialogue.

Dialogue is what one or more characters say in written material. It’s a back and forth conversation to advance the plot, express emotion, or build conflict.

Sometimes it even resolves conflicts. It is a conversation adapted to the art of the written word to immerse the reader in the story.

Creating good character dialogue is the difference between reading someone’s resume and doing an in-person interview.

In the classic novel Rebecca, when Maxime de Winter tells the future Mrs. de Winter, “I’m asking you to marry me, you little fool” he conveyed much more than a marriage proposal. He claimed dominion and ownership.

The words also shortened the timeline to a certain era, as surely no woman would have allowed a man to propose to her like that in the 2000s.

Dialogue must respect the many ways of communication that do not always consist of two people talking in comfortable places.

“The best love is the one that awakens the soul and makes us reach for more, that lights a fire in our hearts and brings peace to our minds. And that’s what you gave me. This is what I hoped to give you forever.’ – Noah Ely’s Farewell Letter to Notebook

How to write dialogue between two characters (or more)

One of the great tragedies for some authors is when a book is turned into a movie, and the main characters are shown in movie previews.

Those who have not read the book are given visual information instead of an opportunity to explore their imagination through the writer’s words.

Bad Dialogue: You’ll know it when you see it

50 shades of gray became one of the best-selling books of the 2000s, but dialogue divas cringed at some of the conversations between the characters.

There are stages in writing dialogue that go beyond the words of the characters’ dialogue.

In writing, the fact or fiction, you must know the innermost qualities, fears and successes of your characters. Even if the answers are hard to find, as Dr. Hannibal Lecter said in “Silence of the Lambs,” “Nothing’s wrong with me, Officer Starling. I happened. You can’t reduce me to a set of influences.”

You need to know what clothes your character will wear, how he will deal with conflicts, and whether he is prone to emotional outbursts. A trained CIA agent will not cry because someone broke up with him.

Grammar and punctuation rules are hard and fast until you get to the few exceptions to the rules. This can make the single comma a moot point. It helps to start with the basics and work up from there.

The problem with a conversation between two or more characters is that the reader can apply their own perceptions and biases to the conversations. That’s why the symbol tag should go beyond “she said” and “he answered.”

Let’s break down a simple sentence that you may be familiar with, “I wish you all a long and happy life.” By leaving out the symbol tag, you can leave the interpretation of the message open to the reader’s imagination. Now here are some ways to untangle character dialogue.

Of course, avid readers know that this was the last line of an emotional journey great bones where a brutally murdered young girl appeared before the audience.

Boost your writing confidence with these 65 affirmations for writers

Loaded language: what are the examples and how to use it?

How long should a short story be?

Although some writing experts advise you never to make a character’s dialogue longer than three sentences, there may come a time when you need someone to speak at length in a conversation between two or more characters.

It’s not a monologue because it’s two people talking, but it can be long and tedious if not delivered correctly. When written for the stage and then the big screen, who would cut even one word from Colonel Nathan R. Jessup “YOU CAN’T TELL THE TRUTH…” dialogue in response to court-martial interrogation?

Going back to character dialogue that requires plot development or something to be revealed, simple things like “Hi, how are you?” are not necessary unless it provides incriminating information. Let’s take a look at this exchange from Nicholas Evans Whispering horses.

Tom Booker: “Will she be around for a long time?“

Tom Booker: “What is she doing?”

Grace: “She is an editor. Just in case she didn’t tell you, and she probably didn’t, I want no part of it. OK?”

He didn’t ask what happened to Grace, as the reader already knows. He didn’t have conversations because that’s not his style and it wouldn’t move the story forward.

What did we learn?

An example of dialogue between two characters

Learning to write dialogue between two characters is like learning to dance. They move in cadence and sequence while revealing plot information.

Here is an example of Pete and Caesar’s dialogue in The hunger games when Peeta reveals that he is in love with Katniss.

“A handsome boy like you. There must be some special girl. Come on, what’s her name?” says Caesar.

Peeta sighs. “Well, there is one girl. I’ve had a crush on her ever since I can remember. But I’m pretty sure she didn’t know I was alive until the Harvest itself.’

Sounds of sympathy from the crowd. Unrequited love they can relate to.

“Does she have another boyfriend?” – asks Caesar.

“So this is what you do. You win, you go home. She can’t refuse you, right?” Caesar says encouragingly.

“I don’t think it will work. Winning… won’t help my case,” Peeta says.

Peeta blushes and stammers. “Because… because she came here with me.”

Think what you learn about the characters in this piece of dialogue when Peeta reveals his long-time secret love for Katniss. This is a key moment in the novel.

There are so many tips and tricks on how to create a conversation between two or more characters. A well-placed dash can reveal a break or flow of thought.

An overuse of dialogue can leave a lot of empty space on the page, and a lack of dialogue can be the building blocks of writing that allow for little character development.

A great way to improve character dialogue is to read the conversation out loud and see how it sounds when the words are hanging in the air. We’ll leave you with this quote from the famous writer William Faulkner.

“Put it down. Take a risk. It might be bad, but it’s the only way to do something really good.” – William Faulkner