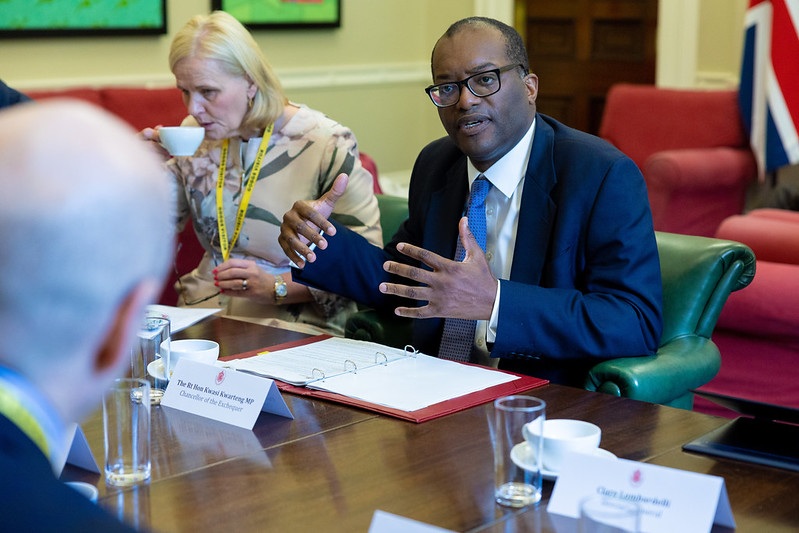 The CHANCELLOR will be today [23/09/22] promise a “new era for Britain” focused on stimulating economic growth.

Promoting growth by cutting taxes and reducing regulation is a key objective of this Government – it will encourage business investment, drive growth, create jobs, improve living standards for all and help boost confidence in the UK economy.

Outlining his priorities in his speech to the House of Commons, Chancellor of the Exchequer Kwasi Kwarteng is expected to say:

“Growth is not as high as it should be, which has made it harder to pay for utilities, requiring higher taxes.

“This cycle of stagnation has resulted in the tax burden projected to reach its highest level since the late 1940s.

“We are determined to break this cycle. We need a new approach for a new growth-oriented era.

“In this way we will ensure higher wages, greater opportunities and sufficient revenue to fund our public services now and in the future.”

“This is how we will successfully compete with the world’s dynamic economies.

“This is how we will turn the vicious cycle of stagnation into a virtuous cycle of growth.

“We will boldly and unashamedly pursue growth – even if it means making difficult decisions.

The chancellor is expected to announce that the government is in discussions with 38 local and borough councils in England, including the West Midlands, Tees Valley, Somerset and Hull, about creating new investment zones on specific sites in their region. These will be centers of growth and are a symbol of the modern Britain this Government wants to create.

These areas will also benefit from further liberalization of planning rules to free up more land for housing and commercial development, as well as reforms to increase the speed of development.

This will include reforms to environmental regulation and orderly planning policies at local and national level, such as lifting height restrictions on buildings, so that investment zones can facilitate further development – including housing and commercial development – at the pace needed to growth stimulation.

Prolonged negotiations between councils and developers on a project-by-project basis for affordable housing contributions will be scrapped. This will be replaced by a set percentage of affordable homes, while ensuring communities get the infrastructure they want.

Investment zones will be created only with the support of local leaders. The Government will work closely with the boroughs to develop tailored proposals that support their ambitions and benefit local people.

The Government will work in partnership with devolved administrations and local partners in Scotland, Wales and Northern Ireland to create investment zones.

The chancellor is expected to say:

“The time required to obtain consent for nationally significant projects is not faster, but slower, and our international competitors are ahead.

“We have to end this.

“To support growth across the country, we need to go further by taking targeted action in local areas.

“We are liberalizing planning rules in certain agreed locations, freeing up land and speeding up development.

“And we will lower taxes, and businesses in designated areas will receive generous tax breaks.”

In 2021, approval for major infrastructure projects took 65 percent longer than in 2012, and no new nuclear power plants have been built since 1995.

A major road scheme takes an average of five to seven years to develop, consult and consent, while some offshore wind farms can take up to 13 years from design to deployment and other projects require 34,000 pages of documentation.

The 1.8GW Norfolk Vanguard wind farm project off the Norfolk coast, which will power almost 2 million homes, has taken nearly 4 years to get through just the planning stages and has faced a legal challenge over the visual impact of the deferred consent scheme for development for another year.

Junction 10A of the M20, an international route that carries high volumes of heavy goods traffic and on public holidays, took seven and a half years after a preferred scheme was considered to gain planning permission due to delays in the planning system.

The chancellor will set out plans to reverse this trend by speeding up projects including new roads and rail, by reducing the burden of environmental assessments in the consultation process and reforming habitat and species rules, which boosts the UK’s economic growth.

Legislation will be developed in the coming months to remove barriers to delivery by reducing unnecessary burdens to speed up vital infrastructure.

These reforms are part of the Government’s efforts to fast-track projects that are vital to our energy security, such as the 6GW offshore wind farm and support for other nationally significant infrastructure such as Hinkley Point C and Sizewell C, the A417 balloon and the Gigabit project.