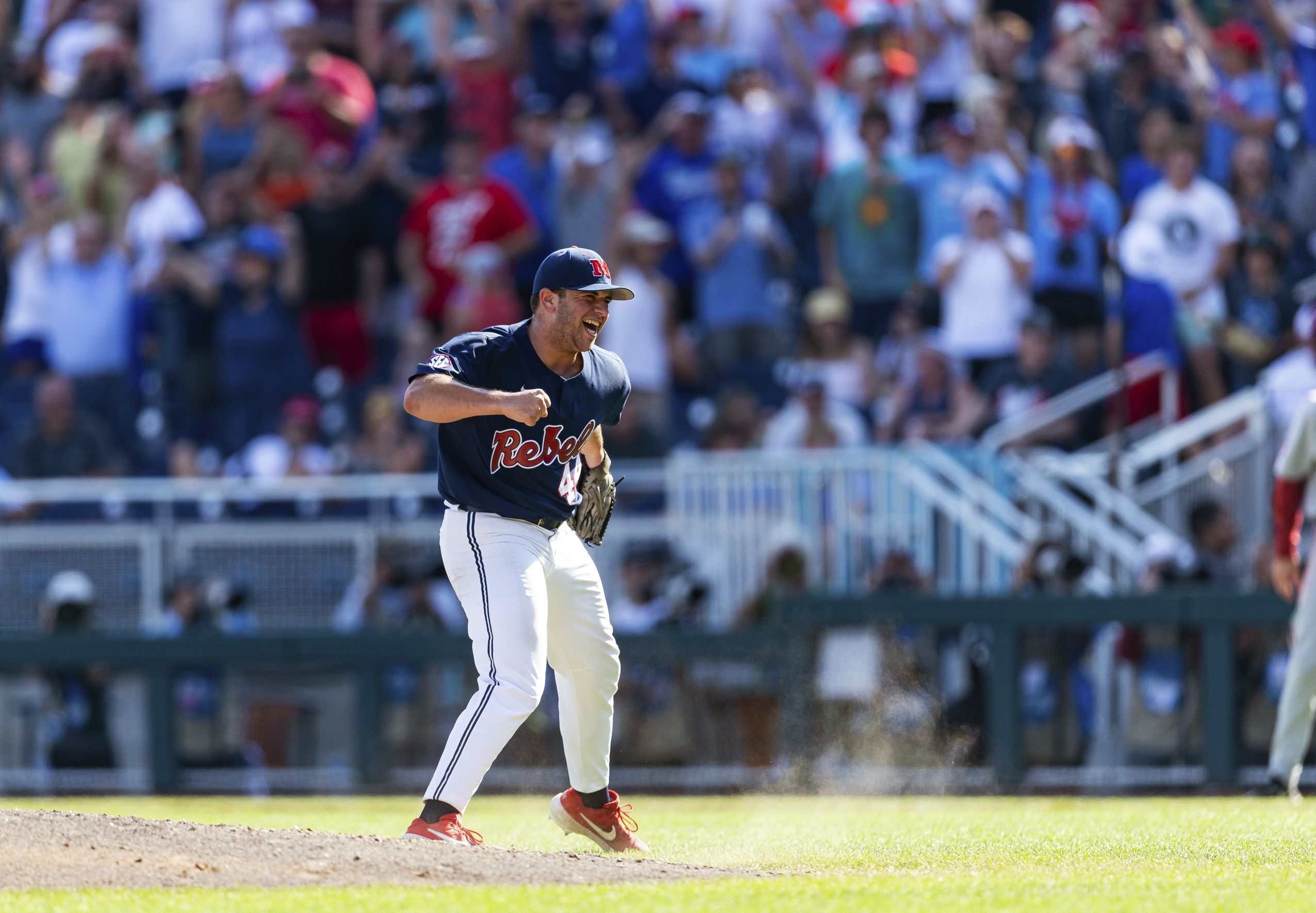 With this remarkable Ole Miss baseball season hanging in the balance, Bianco handed the ball to DeLucia, and the sturdy right-hander delivered the game of his life. DeLucia pitched a four-hit shutout for a 2-0 Ole Miss victory that vaults the Rebels into the College World Series best-of-three championship series against Oklahoma.

That championship series begins Saturday night, which gives Ole Miss fans – and college baseball fans in general – 48 hours to discuss one of the most impressive pitching performances ever seen here.

Listen: No Razorback baserunner ever made it to third base. Only two made it to second base. No Razorback leadoff hitter ever reached first base. Not only did DeLucia never walk a batter, only three times did a Razorback batter see a three-ball count. He struck out seven and induced 11 ground ball outs.

DeLucia gave up two first inning singles – and then only two hits for the rest of the game. He needed 19 pitches to finish the first inning – and then only 94 for the last eight innings. Bianco had his two ace relievers Josh Mallitz and Brandon Johnson fresh and ready to go. He never needed either.

But Ole Miss did need every bit of DeLucia’s heroics, because Arkansas ace Connor Noland was nearly as good. Said Arkansas coach Dave Van Horn, who knows a thing or two about Omaha and the College World Series, “It was one of the best pitchers’ duels I’ve ever seen here.”

The game lasted a mere two hours, six minutes. That’s how good the pitching was. Let’s put it this way, those Ole Miss fans who couldn’t wait to get home from work to watch the last few innings of the most important baseball game in school history were bad out of luck. By the time they got home, it was over, and they could pop the corks.

Remember, DeLucia was pitching on short rest, having lifted the Rebels to a Saturday victory over Auburn, going 7.2 innings and giving up only one run.

Surely, given the short rest, Ole Miss coaches were hoping against hope for five, maybe six, good innings from DeLucia and then to turn it over to the likes of Mallitz and Johnson. Asked how many innings he thought he could go, DeLucia answered, “I just stayed with it. … I just looked and saw all those zeroes going into the eighth, and I was just like it’s my time to finally finish this game.”

He did it in style, retiring the last seven batters he faced. Remember, these weren’t ordinary hitters he was dealing with. Arkansas packs a wicked punch. The Razorbacks were hitting .335 with six home runs and 14 doubles in their four previous World Series games.

Asked about DeLucia, Rebel captain Tim Elko responded, “Hat’s off to him. I don’t know if I’ve ever seen a better pitching performance in a clutch situation.”

DeLucia said he lacked command of his fastball early in the game and went mostly with sliders. Van Horn noted that DeLucia’s fastball, which is often in the mid-90s, was topping out at 90-91 mph, probably due to the short rest.

“… But he located and he pitched,” Van Horn said. “That’s what it’s all about. It’s about pitching, and he did.”

So did Arkansas’ Noland, who matched DeLucia’s zeroes through the first three innings, facing only nine batters, the minimum.

Ole Miss got the only run it would need in the fourth. Ever-dependable Justin Bench singled to right field and then moved to second on Jacob Gonzalez’s grounder to second base. Elko struck out for the second out, which meant that the Rebels needed a timely, two-out hit from Kevin Graham, who promptly laced a double down the right field line scoring Bench easily.

Said Noland, when asked about the pitch Graham hit, “It was a curve ball right down the middle. He’s a hitter, he turned on it.”

Van Horn went a little further later in the press conference, saying, “Thank God, I don’t ever have to see Kevin Graham hit against us again. Seems like that guy is always up. I have nightmares about him, I’ll be honest with you.”

The Rebels added an insurance run in the seventh when Elko singled, followed by Graham – that man again! – beating the Arkansas shift with a well-placed ground ball through the spot where a shortstop normally plays. Elko moved to second on Graham’s hit and then scored on a Calvin Harris’ single to right.

Other than the first inning, DeLucia endured only one tense moment. With two outs in the seventh inning, Arkansas put runners on first and second on an infield hit, followed by an infield error. That brought up Brady Slavens, who had hit a massive home run over the centerfield wall in Arkansas’ Wednesday night victory.

Slavens was almost a hero again, bouncing a ground ball between Elko and second baseman Peyton Chatagnier. Chatagnier ranged far to his left, reached and stabbed the ball and threw a strike to Elko to nip Slavens at first. It was a Major League play.

Next up for the Rebels: Red-hot Oklahoma, which went through its side of the bracket without a defeat. The Sooners (45-22) have a decided advantage in that they will have a rested ace – and a rested pitching staff.

Bianco said he has only seen brief patches of Oklahoma this season and here. “We’ve got a lot of work to do between now and then,” he said.

Van Horn didn’t mind talking about the championship series. In fact, he brought it up.

“It’s going to be a good series for them with Oklahoma,” the Arkansas coach said. “Oklahoma is going to be rested and have all their arms loaded and ready to go. But the way Ole Miss has been playing down the stretch, it might not matter.”

The victory was Ole Miss’s 40th of the season against 23 defeats – amazing when you consider they were once 24-19 and going seemingly nowhere. Now they are in Omaha, college baseball’s Valhalla, on the precipice of a national championship.

Who would have believed it?

“We did,” Elko answered a similar question on Wednesday. “If you don’t believe in yourself, you’re beaten before you ever play the game.”

Please take a few minutes to answer some questions about sports in Mississippi: