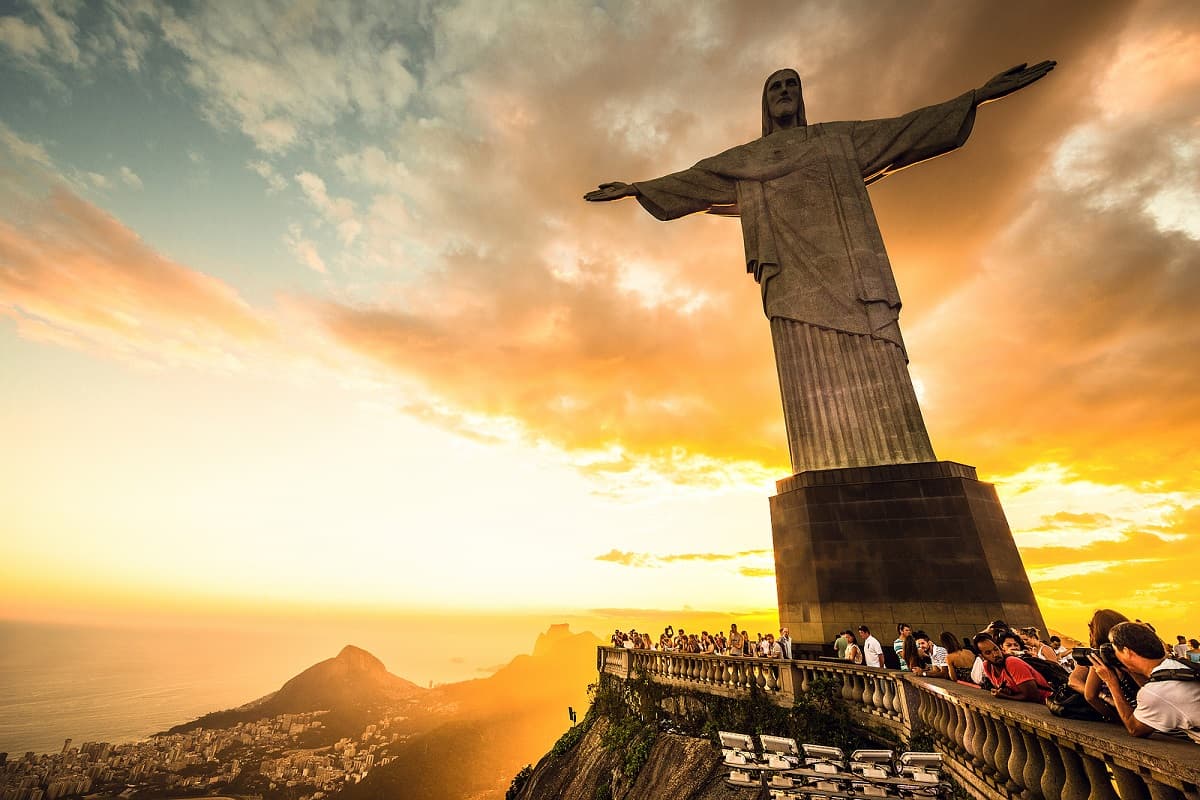 Imagine that you work in a department where it is impossible to achieve your goals, your actions are divisive among employees, and every competent person considers your work useless. No, we’re not talking about the footage, we mean duniversity, djustice, and ienable (DEI) features that should be cut, oh right now that the bear market has started.

If the DEI did its job properly, each organization would be staffed with an exact proportion of the people who make up this planet. An organization of 1,000 people will have to search 85 different countries to start hiring different people – one Cuban, two Rwandans, three North Koreans, four Yemenis, and the list goes on. They will also need 187 Chinese, 181 Indian, 43 American (with a corresponding racial breakdown) and 28 Brazilians.

How the seventh most populous country on this planet with 215 million people – Brazil corrupt like Indonesia and rich as Russia. This is the biggest fintech Latin American market (fifth in the world), with about 700 startup companies. One of the opportunities these fintech companies are trying to exploit is providing B2C payment platforms to the 30 million small and medium-sized businesses that drive a large part of the Brazilian economy. One such fintech player is StoneCo (STNE).

Short-term stock price movements should be taken with a grain of salt, but sometimes you can’t help but wonder what happened to the stock. Below, we’ve outlined what StoneCo’s financial highlights looked like in 2018, the year they had their IPO at $24 per share and participation from Warren Buffett myself

After the stock topped $90 per share in early 2021, things quickly went downhill. StoneCo shares have lost ground over the past year 86% their values ​​(compared to the Nasdaq’s loss 21% over the same period of time), shares are trading around $8.50, giving the company a market capitalization of $2.6 billion. The rapid drop in share price is at least partly due to the company’s small business loan offering, which was wisely put on hold in mid-2021 amid concerns that businesses will be able to repay their loans.

On the credit side, we quickly increased our offer but didn’t manage it.

There is 30 million micro withshopping center and mof medium size dbusinesses (MSMEs) in Brazil, which accounts for 30 percent of the country’s GDP. StoneCo managed to attract almost 2 million of them as customers using the company’s payment platforms. One of the payment products offered by StoneCo is TON, a oldointmentof-withale (POS) a terminal that merchants can purchase at prices that vary depending on the commissions they are willing to pay. The higher the fee, the lower the cost of the terminal.

StoneCo finances not only equipment, but also transactions. In other words, a merchant can allow their customers to pay in installments – up to 12 monthly payments – and StoneCo takes those payments and returns the money to the merchant minus an interest rate that can range from 12% to 25%. Sellers can also borrow against their accounts receivable, which is called a “card receivables-backed loan,” and it’s as risky as it sounds.

StoneCo began offering loans to businesses less than three years ago and has issued loans worth about $647 million. The chart below shows how dramatically the value of this loan portfolio has fallen. (Forget currency conversions, just compare the top number – outstanding loans – to the bottom number – the money they expect to pay back.)

The good news is that StoneCo has almost repaid all $647 million in outstanding loans and is able to make a small profit from the venture. The bad news is that they have shown investors how risky it is to offer credit to small Brazilian businesses and their customers.

We always felt bwell-noh-oldoh-lafter (BNPL) is a terrible idea because it doesn’t take into account the consumer’s credit score or ability to repay the loan. In America, companies are not required to conduct due diligence before extending credit to BNPL. Now imagine that you are providing credit to individuals in a developing market like Brazil, where a credit scoring system was only introduced ten years ago. The complexity only increases when you add other stakeholders such as merchants and banks. StoneCo’s shares may have plummeted because the loan was supposed to be a critical component of the value they expected to get from the businesses.

The company believes this is still possible, and attributes the problem to regulatory changes and — wait for it — Ron. All of this is detailed in an article they published – The New Dynamics of Accounts Receivable Registration in Brazil – about the root cause of their credit crisis. They have now hired a head of credit and plan to relaunch the loan offering with improvements that include “personal guarantees” and “better risk monitoring.”

Offering small business banking products sounds like the idea of ​​”doing good by doing good.” Remember the saying? Sell ​​to the poor, live with the rich, sell to the rich, live with the poor. However, the reality is that operating in emerging or frontier markets comes with its own risks and challenges. The biggest problem is that small businesses don’t have a lot of money. StoneCo reported 510,000 bank customers with about $380 million in deposits — about $736 per business. Each of these customers brings StoneCo an average of $6.28 in revenue per month, which seems pretty high. This is probably because StoneCo has included insurance products, so it’s hard to tell what’s really going on with their banking business. Bloomberg article talked a few months ago about how higher interest rates are creating problems for StoneCo and their competition.

Let’s not forget that the fintech market in Brazil is highly competitive, and local banks and/or the government can certainly use legal/regulatory means to hinder competition. The outrage machine doesn’t work overseas, and in some places it’s culturally acceptable to play dirty. We question how profitable StoneCo will be given that they operate in a highly competitive market, which other analysts have expressed concern about.

Domingos Falavino of JP Morgan was asking tough last call salary questions when he challenged the company’s ability to achieve the profitability that a market leader could hope to achieve. At one time StoneCo had a profit margin of 40% and now they are operating at a loss. According to Mr. Falavin’s estimates, StoneCo has an 11% market share, while the leader has 25%. If StoneCo can take a leading position, they will be able to reduce their fixed costs and increase their margins. Otherwise, they will have to cut costs, possibly by cutting some of the 15,000 employees on their payroll. The company’s response was to raise prices, focus on more profitable customers and introduce banking services (approximately 75% of StoneCo’s two million customers are still unbanked). That’s assuming the emerging market they’re operating in doesn’t throw any more curve balls.

It seems unlikely that Mr. Buffett or many of StoneCo’s bullish analysts have spent enough time in emerging markets to understand how difficult it is to do business in such an environment. Spent a few months scout startups in indonesia, we’ve seen aggressive payment companies trying to capture customers by subsidizing meals. Almost every restaurant in a typical Jakarta mall had a sign from one or more fintech companies offering deep discounts on food if you downloaded their app. The survivor ended up being the firm with the deepest pockets, and the winner’s prize was in doubt. What was the quality of the accounts recorded after all the fraud was filtered out? This is a country where several people can have the same ID number. Only in Jakarta up to five different databases store personally identifiable information, resulting in duplicates and misinformation. Several important questions arise here.

We’ve gone a bit off track here, but the point is that we believe the BRIC countries – Brazil, Indonesia, China and Russia – represent far more risk than we’re willing to take. Technology is risky enough in developed markets, but when you add in corrupt governments, cultural differences, entrenched religious beliefs, volatile currencies and exceptionally cunning criminals, success becomes more luck than skill. StoneCo has staked its entire business success on one country/market and we don’t want to take that risk.

Since we came out of our position in Ali Baba we avoided China as an investment thesis primarily because of the risk associated with VIE structures. There are obviously huge opportunities for implementation in places like China, Indonesia and Brazil, but you need to be on the ground to properly test these opportunities. Any firm that derives its success solely from one country is risky, even if it is a developed market like the United States or Germany. This is just one of many reasons why we will avoid StoneCo stock.

Investing in technology is extremely risky. Minimize your risk with our stock research, investment tools and portfolios and learn which tech stocks you should avoid. Become a Nanalyze Premium member and find out today!

Review: “This new Edutopia video that turned argumentative paragraph writing into a game gave me an idea…”