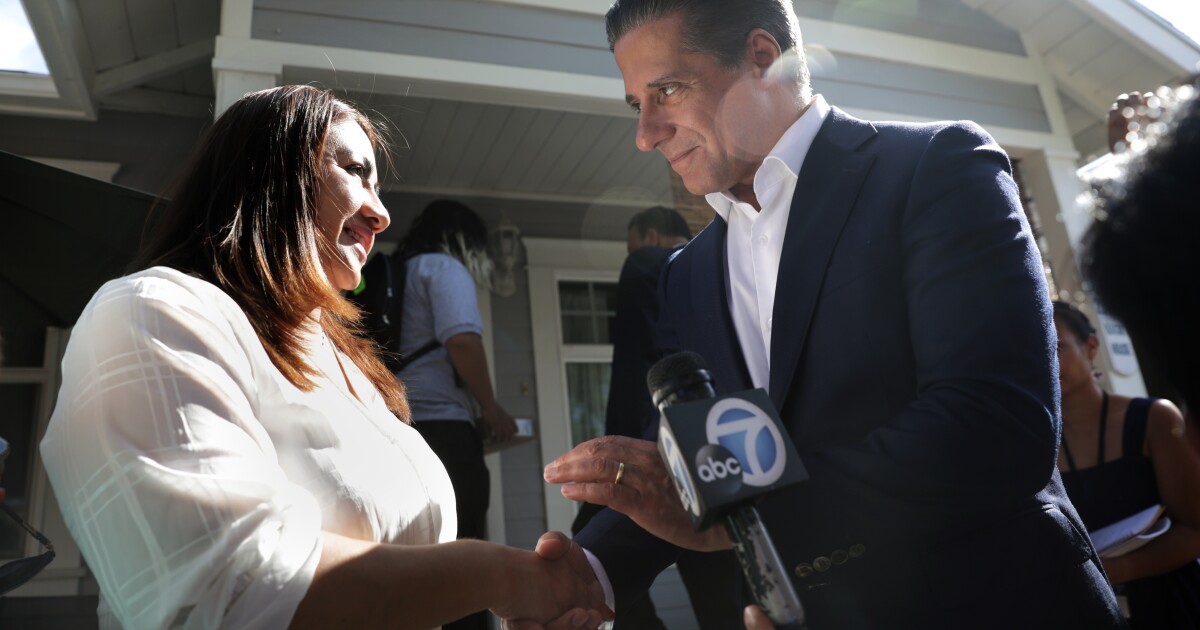 Yordy Luna, 15, who excels at math, loves science and loves to play soccer, missed about 40 to 50 days of class his freshman year of high school, said mother Leidy Luna.

“I knew he was missing and I knew it was my responsibility to do something,” she said. But it was unclear what.

As a single mother who had to get her youngest child to school by 8 a.m., she often just couldn’t get him to go, as his motivation gradually faded starting in March 2020 when campuses closed.

Yordy, a soon-to-be sophomore at Garfield High, is among the hundreds of thousands of LA Unified students who missed a significant portion of the school year last year. Almost half of the district students were constantly absent, this means they have missed 10% or more of the school year. In the years before the pandemic, about 19% were chronically absent, a number that was already considered high.

How the district prepares for welcome students from summer break on Monday, officials are under urgent pressure to get students to attend regularly. On Friday, counselors, staff who volunteered to help and Supt. Alberto Carvalho knocked on the doors of area families whose children regularly missed school, urging them to return — while giving an insight into the palpable hardships of the pandemic that students and parents still face.

​​​​​​While many absentees were related to the COVID-19 quarantines, even when they were accounted for, the chronic absenteeism rate was nearly 30%, Carvalho said Friday.

At the same time, students struggles academically. When the state releases its standardized testing data from last year, the district “will see significant losses in terms of performance in reading and math,” Carvalho said.

“This is also due to the fact that our children did not go to school,” he said. “This is simply unacceptable. We will not leave any of these children. This is our moral business. This is our professional responsibility.”

In the local East district, which includes schools in southeast and east Los Angeles, about 600 staff members were deployed to make home visits and make phone calls to reach about 1,000 students who missed 14 or more days last year.

Carvalho, who was to visit five houses, invited the journalists to join him.

The rise in chronic absenteeism is only part of the problem, which Carvalho called “L.A.’s lost children.”

He calculated that between 10,000 and 20,000 students — perhaps even more — do not attend school or have simply stopped attending it.

Such children are more difficult to trace. But district officials are also working to find them.

On Friday, almost every parent of a chronically absent student said Quarantine of COVID-19 kept their children at home for a long time. One mother said her car stopped working, so she struggled to transport her young children to different schools. The 17-year-old said she felt stressed and overwhelmed by the workload.

Yordi Luna said that when he was in the seventh grade, the campuses were closed, he liked being at school – especially seeing his friends every day.

During eighth grade, which was almost entirely virtual, he essentially stopped walking.

“It was so easy not to go because it was just online,” he said. Instead, he will sleep or play video games.

When his freshman year came around and full-time tuition resumed, he said, “I didn’t feel like it was that important to go to school.”

His attendance improved by the end of the school year when an attendance counselor took him under her wing, encouraging him while tracking his daily whereabouts.

Aimee Mejia said her 13-year-old Cloud missed so many days of school last year that it would be easier to count the number of days Cloud attended.

It’s not that Cloud, who uses the pronouns they/them, didn’t want to go to school. Often they would tell Mejia to wake them up in the morning so they could go the next day. But then morning anxiety will strike.

Cloud was bullied at school and had trouble making friends.

“I want it to be more welcoming,” Cloud said.

When Carvalho showed up in front of her house, Mejia took the opportunity to press the superintendent to make the school more welcoming to her child.

She said she wants the opportunity to return to volunteer on campus, which Cloud finds comforting. For most of last year, parents were not allowed to volunteer as part of the district’s COVID-19 safety measures.

Carvalho assured her that she would now be able to volunteer on campus.

“Are you sure?” Mejia said. She had asked before and been denied.

Mejia also asked why, when the students returned to school, they had to spend so much time in the classroom on the computers. Cloud chimed in and added that sometimes their classmates spent that time watching Netflix.

“I saw it myself,” Carvalho said. “And that’s unacceptable.”

“We switched to online learning, and now that we’re back in school, we’re still doing online learning at school. It makes no sense,” he said. While some digital learning is important, face-to-face interaction is critical.

That was why, Carvalho said, he was visiting that day.

“Let him know what dissuades you,” Mejia told Cloud.

A uniform, – replied Cloud. They said Cloud’s clothes are how they express themselves.

“No policy should prevent any student from going to school,” Carvalho said.

He told Cloud that he would like to visit them at school and follow them for a few periods. Over and over throughout the day, Carvalho reiterated that the visits were not “one and done”.

He said personal visits will continue throughout the school year.

Before leaving, Carvalho promised Mejia personalized help for her child “to make sure we’re really connecting with the Cloud… To ensure a quick acceleration. To ensure the best adaptation to school.”

“I understand,” Mejia said. She hopes, she added, that it will happen soon.