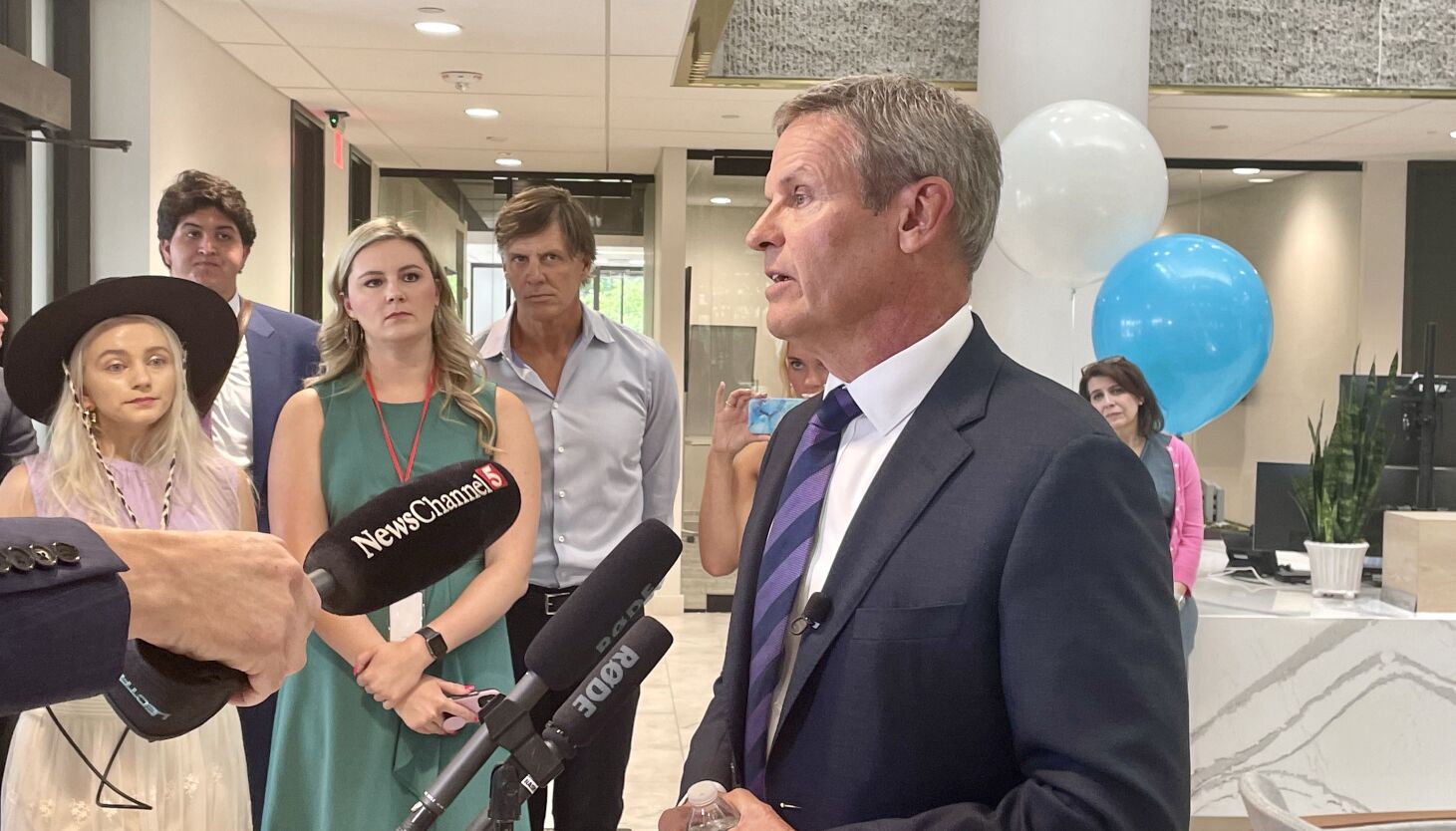 Extolling teaching as a profession and a calling, Gov. Bill Lee tried Wednesday to defuse the backlash that erupted after a leaked video of him sitting silently while a conservative education adviser mocked teachers, their curricula and diversity staff.

But the Republican governor did not dismiss or deny recent comments from his friend Larry Arndt, president of Michigan’s Hillsdale College, who said “teachers are trained in the dumbest parts of the dumbest colleges in the country.”

Lee also sidestepped questions about whether he would end any “partnership” between the state and Hillsdale, a small conservative Christian school that Lee invited to bring one hundred of his “classical charter schools” in Tennessee.

“I fully support our public schools in this state and our teachers,” Lee told reporters, citing increased funding for teacher pay and public education every year since he took office in 2019.

The governor’s response came nearly a week after Nashville station WTVF aired portions of a nearly two-hour video captured by a hidden camera at a private event hosted by Hillsdale in Franklin, south of Nashville.

At an event in June that Lee attended, Arn compared modern education to a “plague” and called the degrees earned by higher education workers “light.”

Speaking about Hillsdale Charter School’s work, Arn said, “We’re going to try to show that you don’t have to be an expert to teach a child, because pretty much anyone can do it.”

But Lee told reporters that Arn was criticizing “the influence of left-wing activists” in public education. “It wasn’t about Tennessee’s teachers and schools,” the governor said.

On his annual state address in January, Lee called Hillsdale a “standard of quality curriculum” and said Tennessee would formalize a partnership with the college based on its approach to civic education. Critics say the 1776 Hillsdale charter school’s curriculum is based on the idea of ​​American exceptionalism and silences or distorts uncomfortable history or progressive ideas.

U radio interview On Wednesday with conservative talk show host Matt Murphy, Lee said Arn’s comments about teachers and their training were taken out of context and stressed they were not directed at Tennessee educators.

And he added: “I will supply ours [Tennessee] teachers are up against anyone in the country when it comes to their performance and their value.”

Leaders of Tennessee’s two major teacher organizations were disappointed by Lee’s explanation, which came amid there is a shortage of teachers.

“Haw. “Lee missed a real opportunity to really separate himself from Mr. Arn,” said J. Sy Bowman, executive director of Tennessee Professional Educators, who called Arn’s remarks “insulting” to the students who attend colleges of education and the professors who teach them.

“The video is clear. Governor Lee allowed an out-of-state privatizer to stand on a stage in Tennessee and insult public school teachers and teacher training programs,” Coates said.

Lee, who is running for re-election, enjoys significant support in polls. But since the June 30 telecast, he has faced swift and sharp criticism of Arno’s remarks from frequent critics as well as some political allies.

Handrel Remus, chairman of the Tennessee Democratic Party, called Lee’s response “a new low for the governor,” while excited educators across the state launched a #ProudToTeach campaign on social media.

The Tennessee Charter School Center, a Lee ally that works to create more charter schools in the state, said in a statement that it “strongly rejects” Arn’s comments, while the head of the Tennessee Association of Independent Colleges and Universities called the remarks “incredibly troubling.”

The Tennessee State Board of Education, which works closely with teacher education programs to address teacher quality and supply, issued a statement after the news report calling the teaching profession “vital to the continued success of our state.”

“He has insulted generations of teachers who have made a difference for countless students,” House Speaker Cameron Sexton wrote Wednesday, adding that he would “never agree with or support Mr. Arn’s comments.”

State Rep. Jeremy Faison, chairman of the House Republican Caucus, said most teachers go into educational institutions because of their commitment to children. “To claim that they are at the bottom of the barrel is incorrect and ignorant. Hillsdale guy does not represent any Tennessean that I know,” Faison tweeted.

State Sen. Ken Yager of Kingston, chairman of the Senate Republican Caucus, agreed. “As a former classroom teacher, I have some insight into the challenges our public school teachers face on a daily basis,” he tweeted. “They do a great job of training our youth. I support them and say thank you.”

Martha W. Aldrich is a senior correspondent and covers the statehouse for Chalkbeat Tennessee. Contact her at maldrich@chalkbeat.org.