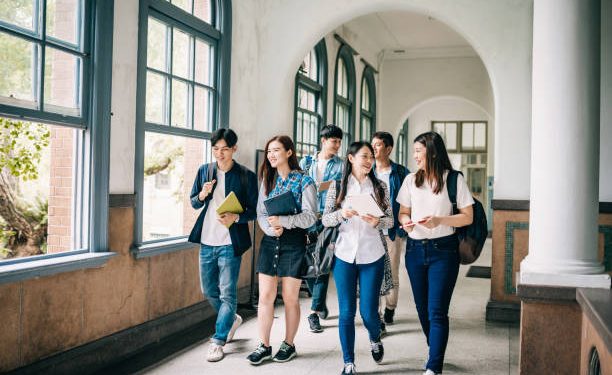 Research published by the education company suggests that parents with study abroad experience and students who want to broaden their international horizons and gain rich life experiences continue to drive Chinese students to seek opportunities abroad.

“In 2022, 48% of students intending to study abroad have already had an experience studying abroad, and this percentage has been growing continuously for eight years,” the report said.

New Oriental attributes this trend to a growing interest in international education from Chinese parents, who see overseas programs as a very rewarding experience for their children.

When deciding where to study abroad, the report shows that more than 50% of Chinese students will evaluate the pandemic restrictions in each country and choose regions that are relatively safer in terms of Covid-19 outbreaks.

However, the study highlights that despite many Chinese students in the US being considered the country with the highest quality of education, the number of Chinese school-aged students in the US is declining. Singapore and Hong Kong are “increasingly popular among people intending to study abroad in 2022,” the report noted.

According to New Oriental, Chinese international students are guided by three main considerations that remain constant when choosing a destination: education level; security; and recognition for future work.

“More attention is paid to university rankings and relevant majors when choosing universities for people who intend to study abroad,” the report noted, adding that more students are making their destination decisions based on school status.

The percentage of respondents who said that the university’s ranking and the availability of a relevant major were the two main considerations, with 66% and 60%, respectively, indicating that they were a factor.

However, the report also says that, more broadly, people intending to study abroad are “taking a more rational view of rankings”, despite the fact that rankings still strongly influence people’s choices. 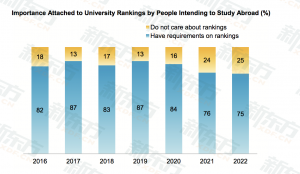 There is also a decline in scholarship consideration as the Chinese economy improves and study abroad budgets increase.

Despite this – which New Oriental suggested was the result of improved economic conditions and increased need for budgets to combat pandemic-related restrictions and lockdowns – Chinese students are spending less while abroad.

The study also analyzed the wider impact of the pandemic on aspirations to study abroad.

Despite ​​​​​​Covid-19, 86% of Chinese international students still insist on their study abroad goals, also believing that studying abroad is an investment to enrich their future.

About 93% of these students were reported to need the help of foreign study agencies, and almost 70% of them had chosen an agency they wanted to work with at least a year before the start of the program.

New Oriental also reported a downward trend in negative perceptions of study abroad as the field continues to gain popularity in China.

“Undoubtedly, studying abroad remains a necessity of this generation”

“The proportion of people strongly refusing to study abroad has fallen, indicating that the abilities of international students are gradually being recognised,” the report said.

Last year was full of challenges for New Oriental, he noted. The company started selling agricultural products and closed it online Branch K-12as a result China’s grip on edtech. The FT reported that the company refused 60 thousand workers and published losses of $876 million.

“Undoubtedly, studying abroad remains a necessity of this generation. In the future, competition for high-quality educational resources will increase.”