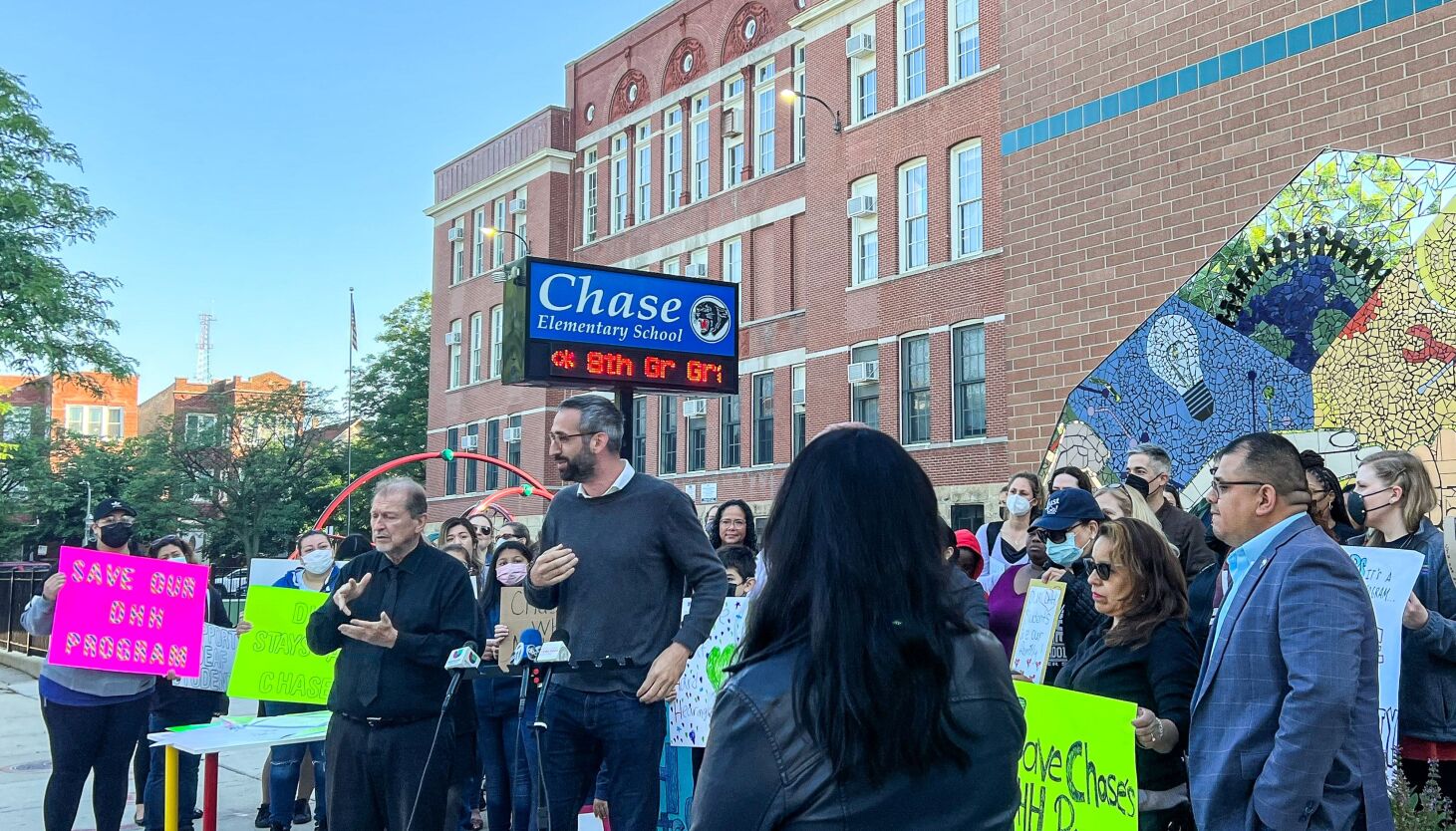 Sergio Hernandez’s 8-year-old daughter barely spoke before she started attending a program for deaf and hard-of-hearing students at Salmon P. Chase Elementary School. She is now excelling at school and “can’t stop talking”.

So when Hernandez heard whispers that the program might be closing, he thought about the struggles his daughter and other hearing-impaired students had to go through as children: doctor’s appointments, multiple surgeries and changing schools. including virtual training in the past two years.

It would be unfair to force them into another disruption, he said last month at a news conference organized by the Chicago Teachers Union to urge the district to keep the program open.

But after the news conference, Bogdana Chkumbava, director of education for Chicago Public Schools, sent an email to Chase families, calling talk of closing the program “misinformation.”

“Despite very preliminary discussions earlier this spring about the deaf and hard of hearing program at Chase Elementary and its future, CPS has not closed and has no plans to close or phase out any of the district’s 36 DHH programs,” she wrote Chkumbava. .

CPS did not respond to questions from Chalkbeat about why the district was considering closing the program at Chase. According to teachers and the CTU, district officials initially cited transportation concerns, then said the need was elsewhere in the city.

Data obtained by Chalkbeat through an open records request shows that enrollment has remained steady in all county deaf and hard of hearing programs throughout the pandemic, even as some schools have gained and lost students.

Last year, according to district records, more than 300 deaf and hard-of-hearing students studied at the CPS. Federal law dictates that school districts must provide a free appropriate education to all students with disabilities.

But as many as 104 students identified as deaf and hard of hearing attend schools that do not have specialized programs for this population. These students are usually integrated into general education courses and receive an aide, according to CPS.

When deaf and hard of hearing programs close, students may be transferred to another school with the program or to a neighborhood school. But that hustle and bustle can cause stress, parents and teachers say. And when there is a lack of communication and mixed messages, it can cause suffering.

Tnaisha Ward, whose son attends Chase, said the 9-year-old boy was falling behind before going to Chase. The program helped him get back on track, stay on track academically and instilled in him a sense of confidence, she told Chalkbeat.

“How do you tell us there are no children left?” Ward said this at a press conference organized by the CTU. “That’s what you do because you don’t communicate with your parents.”

Elba Davila, whose 10-year-old son is in the deaf and hard of hearing program at Chase, said the district needs to recognize the importance of stability for children. Parents have been relying on teachers for information about the future of the program because of the lack of communication from CPS, which Davila called “furious.”

This isn’t the first time CPS has come under fire for its handling of programs for students with disabilities.

The district’s special education program has been under state oversight since 2018, when a report found it detained and denied services to more than 10,000 students with disabilities in violation of state and federal laws. There was a state observer extended last year and will be completed this fall.

In the 2021-2022 school year, Chase’s program had the fourth largest enrollment in the district, with about 9% of Chicago’s deaf and hard of hearing students attending Chase programs.

The program started seven years ago and has grown steadily since then. Figures obtained by Chalkbeat show enrollment in the program remained stable between the 2020-2021 and 2021-2022 academic years.

Some supporters have begun to worry that Chase’s program could be shut down if it stops enrolling younger students after a sharp decline in enrollment in the deaf and hard-of-hearing program at Orozco Academy on the Lower West Side. That program dwindled from 15 students in 2017 to fewer than 10 before it was closed in 2020. It is not clear why Orozco’s enrollment has declined.

Although CPS officials say the program at Chase will continue, parents and teachers remain concerned it could end.

Colleen McKenna, a teacher of the deaf and hard of hearing at Chase, has repeatedly asked CPS to look at the data since March, when she first heard the district was considering closing the program. But she never received any information from the district. At the CTU news conference, McKenna said CPS officials told her and other teachers the program would be discontinued after the next school year.

She and teacher Nancy Bowker said they still haven’t seen evidence that the kindergarten and preschool children have been enrolled for next year. The school district would not provide Chalkbeat with enrollment data, citing privacy concerns.

According to CPS, the Office of Diverse Learner Support and Services continues to manually enroll students in such programs, and students are assigned based on their individual needs as outlined in their IEP, the legal document that outlines services for students with disabilities.

Reem Hamad, whose 5-year-old son Zaheer attends the deaf and hard of hearing program at Chase, remains worried and confused about the future of the program.

Eileen Pomeroy is an intern reporter for Chalkbeat Chicago. Contact Eileen at epomeroy@chalkbeat.org.