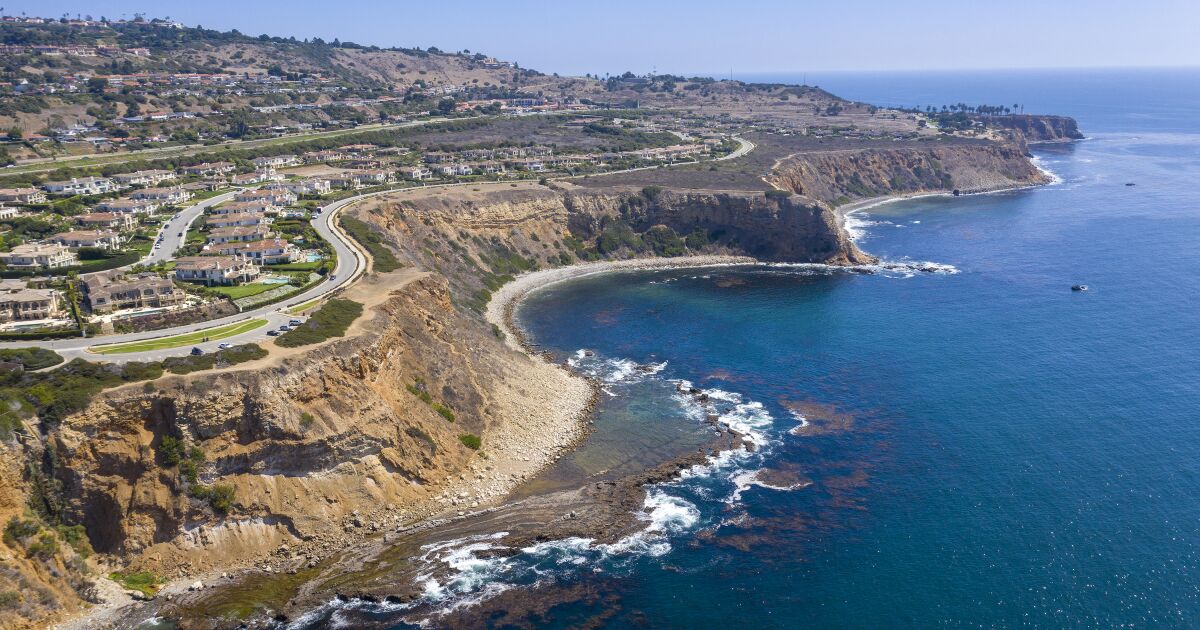 A fault system that runs nearly 70 miles along the coast of Los Angeles and Orange counties could trigger a magnitude 7.8 earthquake, according to a new study that is the latest to highlight the seismic threats facing Southern California.

A system known as the Palos Verdes Fault Zone runs deep beneath the Palos Verdes Peninsula. It was previously thought to be a segmented network of small faults, but a closer look by scientists at Harvard University suggests that it is a system of interconnected, closely spaced flat faults that stretch from Santa Monica Bay to the waters off Dana Point.

The analysis showed that the fault system, which runs under many neighborhoods as well as the ports of Long Beach and Los Angeles, has a much larger surface area that can rupture in the same seismic event, making it capable of a much larger earthquake. than was previously known.

The difference may be only a few decimal places, but earthquake energy is measured exponentially. In accordance with US Geological Surveya magnitude 7.8 earthquake produces four times the energy of a magnitude 7.4.

At worst, the Palos Verdes fault system could produce an earthquake that combines the most destructive qualities of 1994. Earthquake in Northridgemagnitude 6.7 and 7.1 Ridgecrest earthquake that occurred in 2019, said John H. Shaw, a professor of structural and economic geology at Harvard University and one of three authors of the new study.

The Northridge earthquake, which killed 57 people, had a devastating combined side-to-side and up-and-down motion that proved particularly destructive to structures. The same combined lateral and vertical fault movement is possible along the Palos Verdes network.

The Ridgecrest earthquake was an extended series along several interconnected fault lines, similar to earthquakes in the Palos Verdes system.

“Instead of a single line on the map, we saw a gap [series] it could happen over a wide area,” Shaw said of a major earthquake along the Palos Verdes fault zone. Aftershocks would be like falling dominoes, he said.

James Dolan, a professor of earth sciences at USC who reviewed the Harvard report, said the study is “to date the most detailed look at the internal structure and connectivity of the Palos Verdes fault system” that we’ve had.

Previously, scientists could only study parts of the Palos Verdes fault system, which runs mostly underwater. But Shaw and co-authors Franklin D. Wolff and Andreas Plesch pulled together previous research, as well as information from drilling and ground sensors from oil companies, which Shaw and his colleagues used to create a new model of the fault zone.

Oil studies can be useful to earthquake scientists because they give insight into what the Earth looks like below the surface, where earthquake faults lie.

“Historically, this fault has been thought of as a segmented fault — lots of little pieces,” Shaw said. “It seemed like a structure that wouldn’t collapse in one big earthquake.”

As faults slide, that energy builds up over time, Shaw said, adding that the built-up stress waits to rupture and is eventually released as earthquakes.

The effects of a 7.8 earthquake, which would be 45 times stronger than the Northridge earthquake, depend on the location of the fault.

An earthquake of this magnitude on the southern San Andreas fault, which splits between the Salton Sea near the Mexican border and passes through Palm Springs and flows into Hughes Lake north of Santa Clarita in Los Angeles County, could kill 1,800 people , hundreds died as buildings collapsed. , according to simulations of such an earthquake published by the USGS in 2008.

According to the simulation scenario, the freeways connecting the region to Las Vegas and Phoenix could be destroyed, as could the aqueducts that carry most of Los Angeles County’s water. Vulnerable pipelines that carry fuel and natural gas, and overhead power lines through the city Cajon Pass in San Bernardino County could explode, threatening the power grid.

Such a one a powerful earthquake that happen in our lives especially believable because the San Andreas is the fastest-moving fault in the state, sliding at 15 to 35 millimeters per year. Scientists have resembled those who drive at dangerous speeds are the ones most likely to be involved in a collision.

Southern California was last hit by a magnitude 7.8 earthquake in 1857, when the San Andreas Fault broke from Monterey County through the San Gabriel Mountains north of Los Angeles to Cajon Pass. Seismologists believe that the southern San Andreas fault is capable of producing an earthquake with a magnitude of 8.2.

In contrast, the Palos Verdes fault zone did not produce a major earthquake during the same time period. The area has recently experienced magnitude 2 to 3 earthquakes, barely enough to be felt by most people.

Scientists have not fully investigated the effects of the 7.8 magnitude earthquake in the Palos Verdes fault zone. But the USGS has studied the effects of a less powerful 7.3 earthquake, and it could still be devastating. Such an earthquake could kill more than 200 people and destroy more than 2,000 buildings. This could liquefy the artificial ground beneath the country’s largest port complex and cause significant infrastructure damage.

California Institute of Technology seismologist Egil Hawkson said a magnitude 7.8 earthquake on the Palos Verdes fault would devastate southern California. But Hawkson, one of the region’s most respected experts in the field, said that’s also unlikely to happen in our lifetime.

“It would be pretty devastating, but unlikely,” Hawkson said. “It’s not a very active bug.”

Similarly, Shaw said the new information is not a major cause for alarm, especially in earthquake-prone California.

“Location matters. And while future earthquakes on the San Andreas fault are a concern and we need to be prepared, smaller earthquakes occurring in urban environments have been shown to pose just as much – if not more – danger.”