At 14, Joahnavi Sriperambuduru of Hyderabad is a record-breaking climber, philanthropist, classical dancer and artist. This talented girl talks about reaching the top of some of the highest mountains in the world to Suchas Elapanthul

Some young people reach stunning heights. Joahnavi Sriperambuduru from Hyderabad can probably boast that in mountaineering he has won almost everyone. Or even heights. Why? Because at the age of 14 she is fulfilling a mission to climb all the highest peaks of seven continents called Mission7Summit. She is also determined to use these fundraisers to help children with unfortunate privileges get an education.
She has already finished climbing four of the seven peaks, was the youngest in the world to climb Elbrus in Europe in July 2015, and most recently she was the youngest Indian (and second youngest in the world) to climb Mount Denali. also known as Mount McKinley) in North America, in July 2016. She aspires to become the youngest person in the world to ascend all seven summits.

“From the age of three, I accompanied my father on various hikes and expeditions and enjoyed them immensely. Since childhood, I loved hiking and adventure. I never knew what fear was, and that’s how my father raised me to be fearless. I realized that it changes your whole perception and the whole process of thinking, ”Jaahnavi shared.
At age 10, she heard about the Mission7Summit task and wanted to complete it. With the help of her parents and guides, she began training and in October 2014 reached the summit of Kilimanjaro, the highest peak in Africa, becoming the youngest Asian girl to do so. “My goal is not just to reach the top. I also learn a lot in the process. Such rises change you as a person. You learn to be more independent, and the instinct of survival is triggered within you. It makes your thinking process more accurate, ”Jaahnavi said.

We go through the movements
For any climber the feeling they have after reaching the top compensates for all the sacrifices they have made along the way to get to it. This is no different for Jaahnavi. “When I get to the top, for a few minutes I forget about the pain I went through to get there. The feeling is indescribable. It’s absolutely exciting and I have no words to explain it because you’re on top of the world. Everything is under you. Clouds are moving below, and you can see the whole ridge of the mountain, ”she says.
While every dream is to reach the top of the mountain, it is also dangerous. Many lost their lives trying to climb mountains without taking the necessary precautions. Jahnavi believes in a “first and foremost” approach and says all precautions are taken before the lift begins. “Before lifting, we check (at least three times) every piece of equipment we have. Before hiking, our guides are trained. We are always given a number of precautions before we start, our guides because they are professionals. Mentally we keep our minds focused. Because we don’t know if that might happen. Therefore, we must be prepared and ready for everything that comes our way, ”said Jaahnavi, a 10th-grader at Raquelford International School in Hyderabad.

Climbing is dangerous
Explaining the problems she faced during some of her hikes, Joahnavi says, “When I went to Denali, there was a big snowstorm. So we had to create our own way to get to the next camp. When we got to the camp, we stayed there for a week because the weather was very bad and unstable. Getting to the top was extremely difficult due to weather conditions. Coming back too was very difficult because the trail we had created was gone. So we had to re-create a new way to reduce. ”
“The most difficult thing in such circumstances is to endure the cold. My face was swollen due to how very cold it was. Usually when you climb a mountain higher, your thinking process doesn’t really work. Thus, the coordination of mind and body is disrupted because oxygen does not reach your brain properly. In some cases, it can be life threatening. Many people lost their lives during such uprisings, ”said Jaahnavi, a resident of old Alwal in Hyderabad.
Despite the pain, swollen face and frostbite, Joahnavi stepped forward and managed to climb to the top. Ask her what makes her go, she says, “It’s my passion. I like taking on new challenges, I love taking risks. I am supported by the fact that I want to show that Indian girls are not weak. This is also the reason why I founded the Jaahnavi Foundation, which works to empower girls and educate girls. It is still in the process of being processed, and we will start it soon. “ 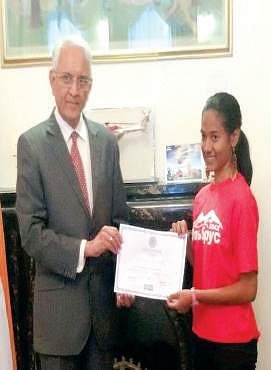 Empowering young women
Her decision to give back to society, perhaps, is what sets Jaahnavi apart, more than her achievements on the mountain. Thanks to the Jaahnavi Foundation, she seeks to educate young girls and give them a desert experience. “I think climbing a mountain changes your whole view and perception of yourself. You feel that you can face anything in life and it gives you the confidence, energy and strength to fight people. Many people do not recognize their own talent. It gives you the opportunity to determine what you are good at, and you can improve it further, ”she said. Jahnavi’s father, Dr. S. Krishna Rao, is her greatest support system, and he accompanies her on most of her expeditions.
“Mountaineering is a friendly game. Since I’m a little girl, none of the other climbers are the same age. The way I think and the way an older person thinks is very different. So my father accompanies me on every hike. I have my own team, which includes my father, guides and my personal Sherpa from Nepal, who gave me technical training and has been with me for four years, ”she explains.

Catch up with coaching
Joahnavi trains three times a week in the morning at the Gachibovlya indoor stadium in Hyderabad. Her training includes physical training and exercises to stay mental. Her school allows her to go on mountain expeditions, and she takes special classes to catch up. “When I travel, I study the program online. I also go to special classes to catch up on what I missed. My mother is a teacher, so she helps me with that, ”the 14-year-old girl explains.

Behind the ice
In addition to being a record climber, Joahnavi is also involved in classical dance (Bharatnatyam) and attends painting classes. She says she does not lead an active social life, but compensates for this with music and dancing. “I don’t go much, but when I’m free, I listen to music. It also helps me in my hikes because when you are on the mountain, you have no entertainment, no cell phones, etc. At that time I had my music with me, ”she says.

In her list of climbs
Next, Joahnavi will try to climb to the fifth peak in the list of seven peaks, when in December will rise Mount Aconcagua in South America. It will then head to Mount Vinson in Antarctica and end at the highest peak, Mount Everest.
As for any other climber, this is one big dream for her. Reflecting on how she is preparing for the greatest ascent of her life, “Everest was my dream and I wanted to climb it before. But a new rule has recently been introduced that people under the age of 16 cannot climb Everest. Since I am only 14 years old, I will have to wait another two years, ”she signed.

The goal of the Minneapolis Academy of Science and Technology is...

“I’m waiting for the next one”: what is taught after the...

The secret to saving money that your cable and ISP doesn’t...

The NRA is organizing a big gun show in Texas a...

The goal of the Minneapolis Academy of Science and Technology is...

“I’m waiting for the next one”: what is taught after the...

The secret to saving money that your cable and ISP doesn’t...