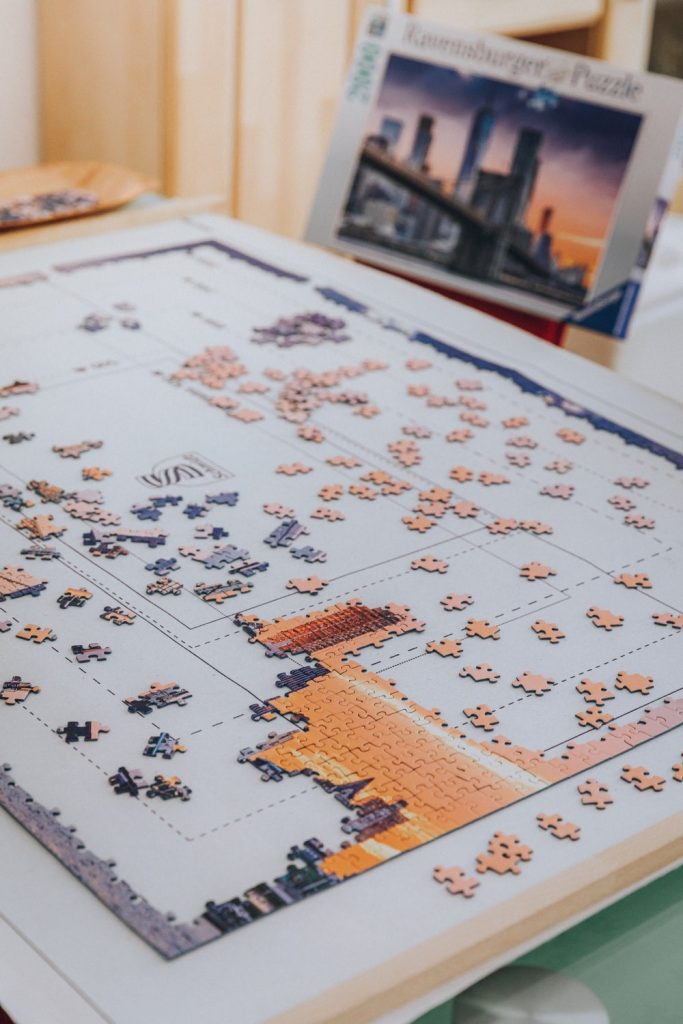 Trump as the ultimate terrorist. This is a picture of a completed puzzle completed by the Committee on January 6th.

By the end of the Committee hearing on January 8, the last 6 pieces of the puzzle had been inserted. The result was a complete picture. Complete filth! America’s clearest picture of Trump as a terrorist-in-chief. Only what was missing?

All in all, I had an extremely difficult time watching this hearing. Among all eight hearings in this first collection.

Admittedly, I missed some of the brutal footage of the uprising. But everything else I definitely saw and heard. Actually, for me go through the whole hearing? It wasn’t a problem. (Because I gave myself many days to see, hear, and think about this generally excellent Select Committee hearing.)

And I really appreciated the dignity, restraint, non-partisan tone of all the members of the January 6 Committee. Of course, this is not only necessary to reveal the truth about what happened with Trump’s attempt to overthrow democracy in this country… It is also necessary to help unite Americans so that more of us can unite around the truth.

This is the unity President Biden has been calling us to develop since the beginning of his presidency. I understand. you too?

all that said what was the problem with the fact that on January 8, 6 Committee hearings … a problem for me?

I found “A puzzle task“

I think there was what I will call a puzzle task. Here’s an analogy meant to clarify, Blog-Buddies:

Every puzzle has two sides.

Especially in our shared COMMENTS below you can learn more about this background image. So as always, feel free to COMMENT. And add your comments as you go. Instead of reading everything to the end. Perhaps by looking at the existing comments and then deciding if your point of view is special enough to post.

Take it from me, your COMMENTS are worth posting. Don’t be afraid.

Pretty soon I’ll wrap up these closing words. Meanwhile, maybe you can assemble your own version of the underside of this puzzle: How about actual guesses in number 8. That is, the last set of committee hearings on January 6th. (I look forward to the next set of hearings, which will probably take place in September.)

Certainly, all these hearings were useful. Undeniably important, factual, rich in detail and beautifully presented. Uniquely thorough! Careful thoroughness was suggested, aimed at conveying to the voters an accurate version of what was said.

However, may I suggest? In the last set hearing, emPHAsis got it wrong. This time, the bottom of the puzzle pieces was too bland, too squishy. In a sense, with a lack of detail that could be considered “political”, but was not political in my opinion. Just factual.

In the portrait of Trump as the main terrorist

Let me show you what I mean, blog friends.

Example 1. Lack of emphasis on Trump as the main terrorist

Trump was watching TV for 3+ hours

Hours when there was a trump actively doing nothing to drown out the crowd! Of course, from the preliminary hearings on January 6th, we know of numerous conspiracies, all orchestrated by Donald.

Trump deliberately chose not to act. Instead, he called senators. And twice Trump called Rudy Giuliani, his strange excuse for a lawyer. After asking his lawyer, Giuliani, now disbarred from practicing law in New York do what? Call the senators to delay the certification of the election.

You heard this over and over again during the Committee hearings on January 8 January 6:

Everything is true. Nevertheless…

Once, and once only, we were shown a video of Trump hanging out. Hi, he wasn’t just “watching TV”.

Funny, I was watch TV off and on after “Howdy Doody”. (1952, approximately.) But I never watched Fox News. you?

Example 2. Lack of emphasis on Trump as the main terrorist

Top GOP Leaders Who Got Away from his rebels

Oh, how iconic! Image of Sen. Josh Hawley, R-Missouri, raising a fist in solidarity with the crowd of Trump supporters near the Capitol on January 6? It became a symbol of the Big Lie of how he and other Trump supporters were supposed to storm the nation’s Capitol.

On Thursday night, a congressional committee investigating the attack offered the public another indelible image of Mr. Hawley — this time of a senator dragging him out of the Capitol as he was invaded by the same people he had cheered hours earlier.

As Luria, a member of the special committee, summarized:

“She told us that Sen. Hawley’s gesture angered the crowd,” Ms. Luria said. “And that really bothered her because he was doing it in a safe place, protected by officers and barriers.”

Or only I felt that the Committee “they buried Lida” in this hearing?

They showed it on time footage of Hawley’s escape?

It will definitely go viral later. But why give us mountains of detail before showing Hawley’s scared little—formerly bloated—mouse?

Hawley is now in the capital. Not protected by officers or barriers. In his true colors he ran like a frightened mouse, which he was.

Example 3. Lack of emphasis on Trump as the main terrorist

Why Trump is stuck Canteen, not Situational

The Situation Room is where the Commander-in-Chief defends the nation during emergencies.

Such as Rebellion, an unprecedented assault on our Capitol!

Terrorist attacks are considered an emergency situation in the country.

Still, the narrative kept repeating simply that Trump was in the White House dining room. As if it was just a small detail. Yes, that’s where Donald liked to hang out.

He hangs out as if he is stepping down as commander-in-chief, but insists on remaining president. For more than three hours, the peaceful transition of power in America was under attack. And yes, Trump just stayed in the White House dining room.

I feel like this place is a really important point that needs to be made over and over again.

Surely viewers of this hearing on January 6th could piece it together. I think the dispassionate style and the mass of detail… numbed me.

Basically, it took me a long time to register the impact of where Trump was and WHY. What about you?

And now to Three final summaries

I mostly enjoyed these three summaries. (Just like the rest of the hearing.) Don’t get me wrong.

Most of all, I am incredibly grateful for all eight of the special committee hearings on January 6th. Including this one.

Still, the overall tone of this latest hearing worried me.

In addition to what I’ve shared so far, how about these last three summaries for this hearing? Wonderful words; words like loud shouts, but never shrill; words that were both eloquent and powerful!

However, as you read the following, fellow bloggers, ask yourself:

Summary from Representative Adam Kinzinger Trump as the main terrorist

In his closing remarks Kinzinger said these passionate words:

“Oaths matter. Character matters. The truth matters,” said Kinzinger, an Air Force veteran and member of the National Guard. “Unless we renew our faith and commitment to these principles, this great experiment of ours—our shining beacon on the mountain—will not endure.”

The Illinois Republican called on Americans, regardless of their politics, to agree that Trump’s actions on January 6, 2021 amounted to “the highest violation of his oath of office and a complete dereliction of duty to our nation.”

“This is a stain on our history,” he added. “This is a shame for all those who have sacrificed and died in the service of our democracy.”

Kinzinger said that when the committee presents its final findings, it will “recommend changes in laws and policies to prevent another January 6.”

Summary from Representative Elaine Luria Trump as the main terrorist

In his closing remarks Luria spoke with quiet determination and her usual reserve. But any hearty listener could also feel her passion. She said Trump was responsible for the deadly attack on the Capitol but would never admit it.

Closing remarks by Rep. Liz Cheney on Trump as the terrorist in chief

“President Trump did not have then and does not have the character or courage to tell the American people what his own people know to be true. He is responsible for the attack on the Capitol on January 6,” she said.

Luria noted that Trump also “never acknowledged the names and memories of the officers who died after the attack on the Capitol.”

Final word by Rep. Liz Chaney about Trump as the main terrorist

Representative Cheney made the final closing remarks. We can discuss more of what she had to say in the COMMENTS below.

The most noteworthy at the moment are the following. Key to understanding the approach taken at the January 6th Committee hearing!

“The case against him is not brought by his political enemies. Instead, it’s a series of confessions from Donald Trump’s appointees, his own friends, representatives of his campaign, people who have worked for him over the years, and his own family.”

Over the years, Trump and Trump Wannabes have often gone public said the quiet part out loud.

In this hearing #8 of the Committee on January 6, hello! This is a prime time hearing muffled the loud part. It seemed quiet.

Anyway, my reaction. That’s what bothered me.

As an Enlightenment teacher, I care about bringing truth to this world. While reviewing this hearing, I found the content to be excellent. Like a big and colorful puzzle picture, all together. But the bottom side, the tone – seemed to me so muffled, unnecessarily timid.

Was it really necessary? What do you think?

Please COMMENT below, telling us what you liked – or perhaps disappointed – about this very important Committee hearing on January 6th.