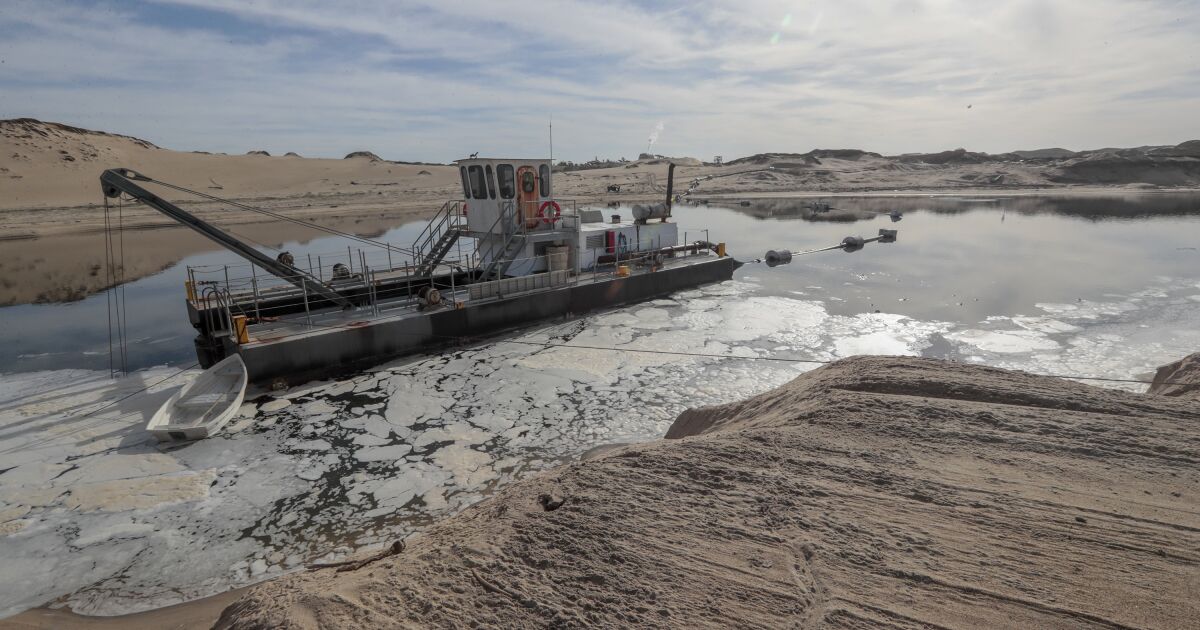 In a decision that shines a harsh light on the state’s commitment to environmental justice amid growing drought concerns, the California Coastal Commission granted conditional approval the controversial Monterey Bay desalination project that even the commission employees themselves said it would be an unfair burden on a historically underserved population community.

“This is a really, really tough decision,” commission chairman Don Brownsey said during Thursday’s stormy 13-hour hearing. “I, like most of the commissioners here, have struggled with it. But I read everything … I talked to everyone … and I feel that this is the right place to land.”

California American Water, an investor-owned utility, has proposed to build more than $330 million a water desalination project at a former sand mining site in the small town of Marina where one-third of the community is low-income and many speak little English. The plant would convert as many as 6.4 million gallons of ocean water into drinking water per day, which will then flow into neighboring cities and businesses.

The proposal drew testimony from more than 350 speakers and was seen by many as the commission’s first major review new power to consider potential harm to underserved communities in addition to environmental impacts. U The report has 157 pagesCommission employees announced the submitted proposal “the most significant environmental justice issue the Commission has addressed since the adoption of the Environmental Justice Policy in 2019.”

The commission delivered its ruling in a Salinas chamber packed with lawyers, local water officials, labor groups, tribal leaders and residents from across the region. Many noted the presence of Wade Crowfoot, Gov. Gavin Newsom is a top natural resources official who spent the day at the hearing and gave opening remarks emphasizing the need to diversify California’s water supply.

Among this amid repeated calls from the Newsom administration rapid desalination, commissioners examined water demand projections, impacts to local groundwater and other water supply issues. However, the crux of the debate centered on whether it was acceptable to continue to burden some communities, but not others, with the burden of industrialization.

Marina, with a population of more than 22,000, already bears the brunt of the regional landfill and sewage plant, as well as sand my which has been moving away from the coast for more than a century. Many speakers also questioned the economics of the proposal, condemning it reports that Cal Am’s treated seawater will cost nearly $8,000 per acre-foot — a shockingly expensive price tag that could burden ratepayers across the Monterey Peninsula.

Commissioners, who voted 8-2, acknowledged those concerns and tried to remedy the situation by demanding a strict set of conditions — including guaranteed protections for low-income ratepayers, intensive monitoring of any potential groundwater damage and extensive restoration of valuable dune habitat. They also ordered Cal Am to give the marina $3 million and a full-time employee for 10 years to develop more public amenities for the community.

Residents of Marin, however, said it felt like a slap in the face.

“Essentially, they’re saying environmental justice can be achieved for $3 million,” said Kathy Jaeka Biala, who has spent many hours late advocating for her community. “It becomes a monetary issue, not a principle that needs to be upheld.”

Caryl Hart, one of two commissioners who voted against the project, echoed that sentiment and said Thursday’s vote was a failure of the commission’s espoused values.

Water policy is rarely easy, but along Monterey Bay it’s especially complicated: a region cut off from state and federal aqueducts has limited water options. A few communities, like Marina, draw their own groundwater, but most rely on Cal Am, which pumped the Carmel River for decades.

But the river, which once spawned 10,000 Kumzu, has been hit by water shortages in the region. Cal Am was pumping more than three times the legal limit, and by 1995 the State Water Control Board had ordered an end to the overdraft — a deadline that was extended to December 2021.

A number of alternative supply projects have been proposed over the years, including a new dam and desalination plant at the Moss Landing power plant. Voters rejected a plan to fund the dam, and environmentalists rejected all marine life that could be harmed by siphoning water directly from the ocean.

So Cal Am tried again with the Monterey Peninsula Water Project: a smaller desalination plant that would use inclined-well technology that doesn’t draw water from the open sea. They chose a new site – a recently closed sand mine in Mar’ina.

This scaled-down project builds on the new one community recycled water project to fill the demand gap. Over the past two years, in the face of increasing controversy, the company also agreed to build the project in phases and further reduce the total area from six inclined wells to four.

“We used the best available science and technology. We thoroughly reviewed everything and responded to every objection we heard — and we took what we heard and made changes to the project to make it better,” said Kevin Tilden, the company’s president.

Cal Am also offered to sell some of the desalinated water to Marina (which the community said further insulted), and struck a deal to provide water at a discounted rate to Castroville, a small community of farm workers on the brink of collapse.

“The median household income here is $35,000, and I’m not sure that takes into account the fact that it’s usually two families crammed into a house,” said Eric Tynan, general manager of the Castroville Community Services District, who noted with obvious panic his voice that his community had just lost its best well to seawater intrusion.

Critics say Castroville has been played up — a false pitting of one disadvantaged community against another. That’s what happens when a big water company controls so many pieces on a chessboard, said Melody Kryslak, who heads public effort to buy out Cal Am put an end to the excessively high cost of water.

Even the most conservative estimates show that the average ratepayer would pay at least $564 more per year to fund the remediation project. But the final burden of the costs — and whether the water is needed at all — remains unknown, pending a final decision by the California Public Utilities Commission next year.

“There’s something political going on here that really stinks,” said Kryslak, a longtime Carmel resident who said it was premature for the Coastal Commission to sign off on the project before the CPUC’s determination.

Kryslak, along with many others, on Thursday pointed to Pure Water Monterey’s new water recycling project as a fairer and more environmentally conscious way to meet the region’s water needs for at least the next three decades. Expanding this other project — a collaborative effort between local government agencies — would also be much cheaper.

Cal Am declined to provide updated estimates, but State Water Services did is calculated desalinated water can cost at least $7,900 per acre-foot, or 325,851 gallons. (Compare that to the $1,700 per acre-foot cost of the state’s Doheny Desalination Project, which the Coastal Commission approved the last month. Even the controversial Poseidon Water proposal in Huntington Beach, which the commission unanimously passed rejected in May it would cost less than half that, at $3,000 per acre-foot.)

Recent filings with the US Securities and Exchange Commission also show that Cal Am has already suffered 206 million dollars in the aggregate costs associated with the project.

State Assemblyman Mark Stone (D-Scotts Valley), who represents all concerned communities and opposes the project, noted that “Cal Am, as an investor-owned utility, owes its loyalty to its investors: it has to grow, it has to to make money, it must be profitable.’

Some commissioners, concerned about these unanswered cost questions, made it clear that the project could not begin without final approval from the CPUC that the water was indeed needed.

Back in the Marina Thursday night, residents were clearly exhausted from trying to keep up with Cal Am’s more difficult lobbying.

“I’m suffering,” said Bruce Delgado, Marina’s longtime mayor, his voice cracking with emotion as he spoke of all the families, school teachers and students who spent another day pleading their case to the authorities.

Delgado said the city is considering the following options. The marina has already sued Cal Am, and local leaders recently floated the idea of ​​building their own water supply through a pipeline to Castroville. Their two communities, both struggling, should never have been pitted against each other, he said.

For Monica Tran Kim, who works four jobs to make ends meet, getting to this week’s meeting meant sacrificing more than 12 hours of work. But she felt a huge obligation to speak up for the city’s large refugee community.

Kim, whose parents fled Vietnam and started a new life fishing off the Marina’s open shore, said many are reluctant to oppose a politically powerful company like Cal Am. She often thinks about the hardworking families that were historically exhausted Pacific Grove and other wealthier towns nearby.

“First it was land, now it’s water,” she said. “This is a historical repeat of people in power taking away what is valuable from a community that they don’t think is deserving — from a vulnerable community.”