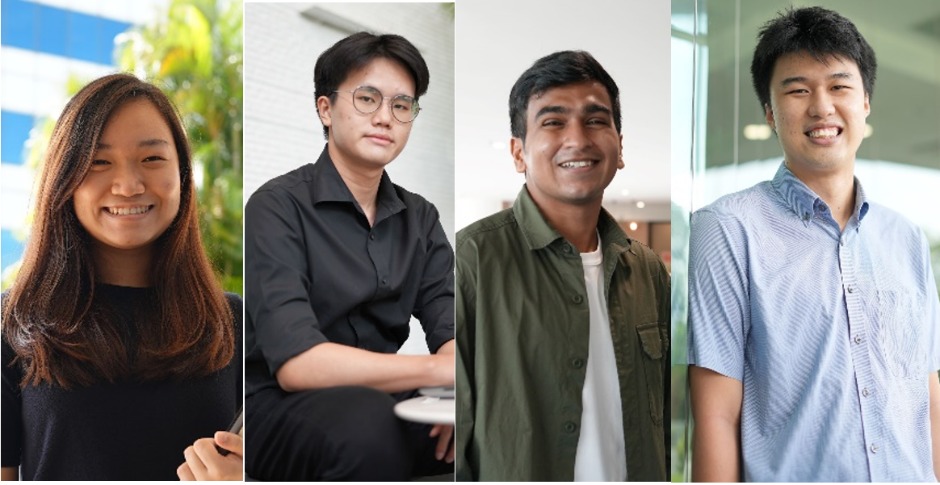 From snake games to cybersecurity, we meet 4 science-loving students who are boldly stepping into new worlds of technology and helping their peers and parents (and us) understand all of this.

Faced with the crossroads of life, the large number of options can make choosing a path quite difficult. What else if you face the world of cybersecurity, artificial intelligence, robotics or application development – the central themes for the fourth edition BrainHackorganized annually by the Defense Science and Technology Agency (DSTA).

We meet with four students who take part to find out how they expressed their love for everything technological.

Enjoy the process of reasoning

Kemi is related to numbers. “Since childhood, I’ve loved how math uses logic to understand things. It gave me a sense of accomplishment when I managed to solve the problem, ”she explains. When she grew up, Camie showed a special interest in two numbers: one and zeros – binary code in calculations.

Her CCA at River Valley High School sparked her interest in coding. In 2017, the school brought Cammy and her CCA friends from the Academy of Leaders in Mathematics to the UK to participate in the Mathematics and Computing program.

Cammy (back row, first right) with her CCA classmates at Imperial College London as part of a program in mathematics and calculus in the UK

“I had to try computing for the first time,” says Kemi, “and in just an hour I was able to encode my own game with a snake and even a conversational bot with artificial intelligence (AI) like Siri!”

She realized that she likes to create digital tools to improve people’s lives, especially in data processing. “I’m fascinated by how you can use programming to make sense of a variety of data sets to get useful information,” she explains. But with as many computer courses as she knew what to choose?

She took part in a dialogue on a relatively new course in data science and artificial intelligence at Nanyang University of Technology (NTU), where prospective students could talk to professors and seniors to learn more. “It was in line with my interests, the happy balance between math and computing,” she says.

After finishing her first year of university, she participated in one of the events within the BrainHack DSTA, organized in 2020. A virtual meeting called “Today I learned – AI Camp” taught participants to program a computer that can identify clothes in the picture. The technology is known as “computer vision”. She liked it so much that she also joins this year’s edition.

“I was surprised that I could learn something so difficult outside of school. I am also grateful to the teachers from DSTA. We could easily ask them for useful materials and suggestions, ”says Kemi. At BrainHack 2020 she also gained more advanced coding skills such as deep learning. She has since completed an internship to study various industry specializations. She is currently an intern at DSTA on a natural language processing project and hopes to continue working in this field.

Be your own proof of concept “My family is not good at technology,” says JY. “Since I was seven, they asked me to fix all our technical problems. So I had to sort things out, research and figure it out on my own. ”

When he received an A1 grade in computing for O-Level exams, he took it as a testament to his strengths in the field. Convinced of what course and work he wants to go to, he decided to enter the Polytechnic. But he wasn’t sure of the specialty he wanted. He therefore applied for the Common ICT (Information and Communication Technology) program at the SP through an exercise for early admission.

Ji Yu says that thanks to the Cyber ​​Defenders Discovery Camp BrainHack in 2020, he could gain a wide range of knowledge in the field. In one assignment, students competed over who could solve the most tasks in 48 hours. He returned to camp in 2021 and joins this year. With each successful experience, he proved to himself that he has the skills to pay bills. Eventually he decided to specialize in cybersecurity.

“Everyone deserves to use technology without fear and worry, and I want to contribute to that. Studying cybersecurity would mean that I can help keep our smart nation safe, ”he says.

“Cybersecurity is like a battle involving two types of players: opponents who are trying to compromise the system, against people who are trying to protect it,” he continues. “But there is also cryptography, which is to secure messages so that only designated recipients can read them.”

He approaches the choice of course in the same way as to computational problems: try different methods until you find the one that works best. Finding time for internships, research, or participating in hackathons such as BrainHack, all helped him explore different areas of computing.

Helping his parents understand his learning choices took some time to prove he knows what’s going on. Ji Yiu’s parents were a little hesitant to let him go to a field they knew little about. He helped them warm up to this idea by sharing with them his positive results, as well as any of his projects and achievements in coding. “When I wanted to do something new, I tried it first. If it worked out well, I’ll make sure to show it’s them. ” These proofs of conception helped his parents gain confidence in his ideas.

Jiu is currently undergoing an internship at DSTA and will graduate from the Polytechnic next year. This will serve as proof of his concept for a degree in computer science. At the same time, he is still a family technologist and also helps his 11-year-old sister set up her Zoom for school.

Take responsibility for your learning Yash often advises his younger ones to “make room for aspirations, not just go with the flow.” He says, “It’s easy to get carried away with school tensions, but then looking back and not knowing what you spent your time on.”

He seeks to have a conversation. At the end of his fourth year of the integrated program at Victoria School, he joined his peers on monthly work supplements after their exams. During this time, he learned to create his own mobile app – by clicking on open source, which he found in Google, and asked for advice on Stack Overflow, an open forum where coders can ask questions and answer them.

But he still wanted to explore his options. Raised by his grandparents, he saw how they suffered from diabetes and other medical problems. “I wanted to go into medicine to help people like them,” he says. So, at the end of JC1, he was looking for opportunities to experience the lives of health professionals to see if he was meant to be. A family member referred him to the Admiralty Medical Center, where he worked at a diabetes clinic, supervised by a nurse. However, what caught my eye was the glucose patches used and the program that took the data and made sense of it for the nurses. “Then I realized that my interest was in technology and how it could help others in healthcare, but on a larger scale,” says Yash.

In NS he served as a communications officer, where he learned about computer networks and communications. While on bed he decided to attend as many online coding courses as possible, using the electronic credits offered by NS, it was then that he learned to code in Python.

“The more I researched, the more I liked it. I liked how you immediately see the results of your work. You run a script and it either works or it doesn’t work, then you fix the problem, ”he says.

Now Yash is confident that he is studying computer science at university. After graduating from NS in 2021, Yash began an internship at DSTA in February 2022 and studied computer vision, artificial intelligence, machine learning and more. Along with his fellow DSTA interns, he is also participating in this year’s BrainHack.

“Hackathons are a good way to learn new skills in a stressful environment, which I think is good for learning,” he says, laughing because he knows some may disagree. “It also allows you to meet and learn from people from all walks of life.”

Explore and then make a leap of faith Like his university colleagues, Nicholas, a fourth-year computer science student at NTU, studied a typical combination of physics, chemistry, economics and math subjects at a junior college. He chose the STEM-related major for undergraduate study because his parents believed it opened up the greatest job opportunities.

During his first two years at university, he was unsure of what he wanted to specialize in. But the switch in 2020 offered him clarity. He joined BrainHack “Today I learned – AI Camp”, where local mentors advised him on career paths, as well as what skills are needed to make a career in AI.

“They invited me to create my own coding projects to see what I really liked. So I did, ”he says. Nicholas also stumbled upon an online course on deep learning. Next, he created his own “next word predictor” where users can enter a phrase or incomplete sentence, and the algorithm will predict the next word that best completes it.

Everything led him to decide that he wanted to pursue a career related to AI, and even took a course in mathematics to integrate it with AI concepts. “It took a few leaps of faith to try things I had never done before, but through them I discovered my strengths and weaknesses,” Nicholas says. Nicholas (center) with his classmates holding one of his engineering projects for the university.

In 2021, Nicholas rejoined BrainHack. To complete his final year at university, Nicholas will also be at this year’s BrainHack.

Read about how this Singapore Polytechnic graduate discovered his passion for programming and took advantage of exercises for early admission to: Let’s play by force – James Lim, a self-taught programmer

With new technology comes a new career landscape. Learn about the twists and turns in starting a business from Vinod Nair, MoneySmart.sg’s founder and CEO Sandbox for students: time to take a risk